Spring arrived early here in the South. Actually, some days already feel like summer. Temperatures are in the mid-80’s which means flip-flop season had begun. Or should I say sandal season? Either way it is toes out time. The warm weather also gave me a craving for ice cream. I want something to cool down after mowing the lawn or tending to the garden. A few spoonfuls of a frozen treat sure does the trick.

Ice cream has always meant summer to me. My parents would make it for dessert at our family summer dinners. My father, uncle, brother, and everyone would take turns churning it. It was one of the ice cream makers with a hand crank. I also remember my parents getting an electric model as soon as one was available. It was a whole lot easier only having to add ice and rock salt while sitting and watching it churn all by itself. 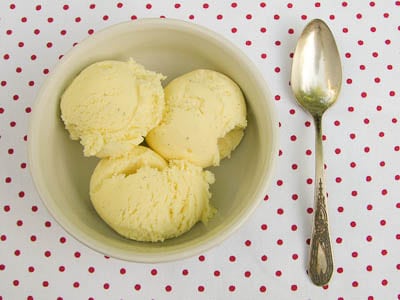 My first ice cream maker was one like my parents. It served me well for a long time but was later replaced. I now have one with a bowl you freeze

. I keep it in the freezer all the time so it is ready to use whenever. It is awful handy. Plus it eliminates the possibility of getting salt water in your ice cream. Have you ever had that happen? I have and it was awful.

Vanilla bean ice cream is the first batch for this season. The caramel sauce in my fridge was begging to be put on something. It would also be fantastic with my apple dumplings. The recipe is a result of combining about four different ones and years of making ice cream. It has the right texture and does not become rock hard once it is stored in the freezer.

What is your favorite ice cream flavor? I would like your ideas and suggestions for new ones to make. The season has just begun and I am ready to fill it with all kinds of tasty ice cream. 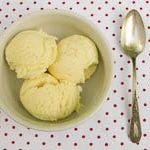 A recipe for old-fashioned vanilla bean ice cream. A tasty frozen dessert made with a vanilla bean, cream, eggs, and sugar.

Thank you for the recipe. My order of vanilla beans just arrived today and I bought the icecream maker attachment- its been sitting in my freezer overnight. So I plan on making the mixture tonight and making it tomorrow. So excited!!!

Oh my, does this ever sound tasty!! My husband is a vanilla fiend, he would love this. Now I need an ice-cream maker!

Thank you Sasha. You should get an ice cream maker. It is something that once you make your own ice cream you will not want store-bought again.

How would you get salt water in your ice cream? Lol.

By not paying attention and having the drain hole become blocked on the old-fashioned type ice cream makers. The salt water would rise and seep into the container of the ice cream.

My hubby and I decided it was time to get a ice cream maker:-) This looks sooooo delicious! I love this time of the year:-) Take care, Terra

I could eat a tub of that homemade delicious ice cream.