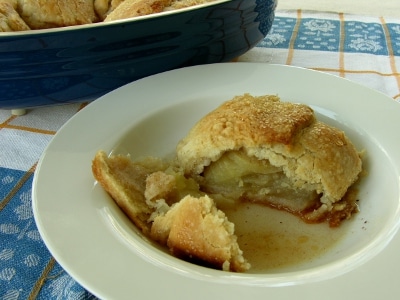 Ever want to make something after having it in a restaurant? It happens to me all the time. It is one of the reasons I love to dine out. I get to try new things and have foods I do not often cook at home. Take seafood for example, I love it raw (sushi), steamed, grilled, pan seared, roasted, and just about every way except deep fried. My husband is the exact opposite. He likes batter-dipped deep fried fish and chips. Add in the fact I have to drive 30 miles to get any fresh seafood other than the limited selection at the grocery store and that is why I typically go out when I have a seafood craving.

Being disappointed is another reason to make something at home. When you see something on the menu and it sounds so good you order it. There is the anticipation of a tasty bite and then it arrives and is nothing like what you wanted. This is the case with apple dumplings for me. There is a restaurant where we have ordered it before. It is a very large dumpling and is really too big even for the two of us to share. Lately they offered a sampler size which we thought would be great. Not so much. I left the restaurant with a mission to make apple dumplings.

The recipe hunt began. I searched the internet and did not find one I wanted to make. I moved on to my cookbooks and found what I thought would be the one. I ran into a snag when I tried to roll out the dough for the number of dumplings in the recipe. I am quite sure the dough should not be 1/32nd of an inch. There was no way it would work. It went into the trash and I found another dough recipe. The second one came out just right. Both recipes had a sauce, one to pour over before baking and the other to pour over when serving after baking. I decided to pour it over before baking and they turned out great. A little rustic looking too: 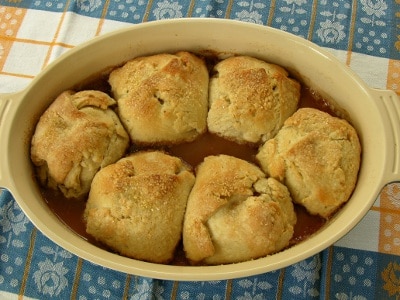 Have I mentioned I love kitchen gadgets? I got to use my handy-dandy apple peeler/corer/slicer

that I have not used in a while. I love that thing. You can get your apples ready in a flash. I have had mine for several years and bought if after hearing how much my parents liked using the one they have. I get to use it again soon because I have extra apples and some leftover crumble topping in the freezer. 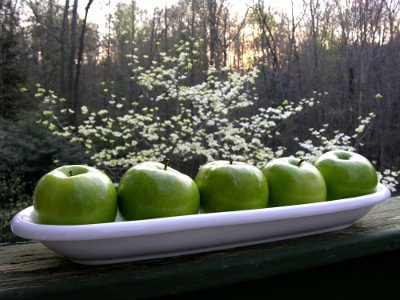 My recipe is an adaption/combination from the two I used. The original ones can be found in The King Arthur Flour Baker’s Companion

cookbooks. Both are excellent cookbooks and I have used them on many occasions. I do not know what I would do without cookbooks. The internet is great (ahem, like getting recipes from blogs like this one – hint hint) but their is something about flipping through the pages of a book. Thank goodness there are both resources available.

What have you wanted to cook after dining out? Was it from a good or disappointing experience? I have been inspired many times and I am very glad when I can turn a not-so-good into a fantastic one at home.

Have you subscribed yet? Subscribe to Magnolia Days by Email 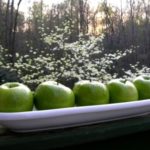 A recipe for apples baked in a flaky crust with a cinnamon sugar filling and a buttery sauce.

A recipe for apples baked in a flaky crust with a cinnamon sugar filling and a buttery sauce.

I Love trying to recreate recipes from restaurants! What a fun recipe:-) This looks fantastic! Take care, Terra

Followed a tweet to your blog, and discovered not only the fantastic recipes, but that you appear to be a fellow greyhound and/or whippet mom! Thank you so much for sharing

Thanks for visiting! Yes, I am a whippet mom. I have 3 very spoiled ones. Hope you come back to visit soon.

yum, these sound awesome! i'm frequently inspired by dining out at restaurants + love trying to recreate (or improve upon) things at home. =)

It is nice to re-create what we discover in restaurants. I'm with you on the improving upon when it needs to be done.

Lovely and so delicious!!My kids love apple desserts and I cannot wait to try this recipe Renee!!Thanks for sharing and have a great day!

Thank you Soni! My husband really likes apple desserts too. He ate most of them over a few days time. I am sure I will be making them again for him soon.

These look SO good, Renee!!! I make a "cheater version" using crescent rolls, but I'm going to have to make these!

Thanks Jen! I have seen recipes with crescent rolls and store-bought pie crust but I wanted to make it all from scratch. I'm glad I did.