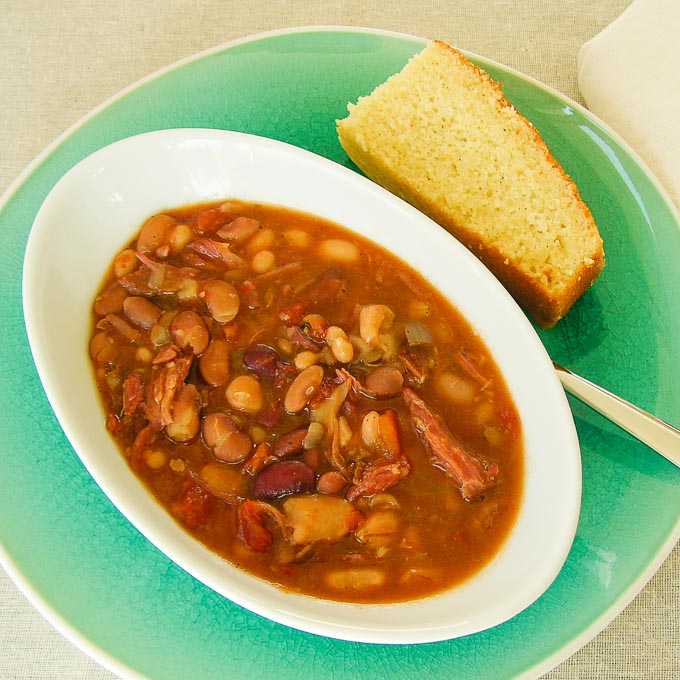 Do you have a ham bone? This soup is one of the best uses for one. Hopefully, if you had a ham recently, you did not throw away the bone. If you did, that is okay. You should be able to buy a ham bone from a ham company such as HoneyBaked Ham. I had two small ham bones in my freezer and the recent winter chill made me want to make this soup.

There are 15 different kinds of beans in this soup. It is a hearty soup that will fill you up and keep you going. I like it with a big piece of cornbread. Actually, I will crumble the cornbread up and add it to the soup as I am eating it. So delish! 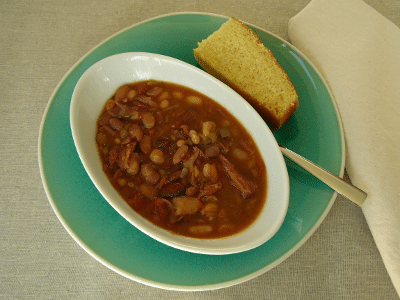 I do have to thank my friend Terry, @tbgdesign on twitter, for the first ham and bean soup I ever had. Terry makes the best soups. She is the one who inspired me to start making more soups, including this one. The recipe is adapted from the one on the back of the Hurst’s HamBeens® 15 Bean Soup bag.

Homemade soup is easy to make. The flavor stands above and beyond store-bought soups. Most soups are inexpensive and they freeze well. A big pot of soup can feed a large family or make several meals for a small family. Do you make soup? Which one is your favorite? 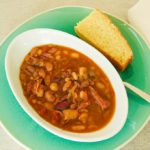 Ham and Bean Soup is a hearty soup made with ham and 15 types of beans. It is a great way to use a ham bone to make a delicious meal.
Course Soup
Cuisine American
Prep Time 10 minutes
Cook Time 3 hours 50 minutes
Total Time 4 hours
Servings 8 servings
Author Renee

i love the recipes on this website thx for adding me :)

Lima bean soup? I have never had that before. Interesting.

awww shucks. thanks. This soup was delish, also!

Glad you liked it! Now I'm looking forward to your next soup...