Home » Recipes » Cake » Cupcakes with a Surprise Inside 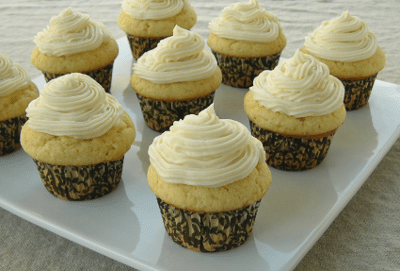 Cupcakes certainly have been popular in the last few years. In a small town near where I live there was a cupcake store next door to a cupcake store. This is in one of those old towns with a square. Right there on the square were the two stores with their big cupcake signs right beside each other. I could almost see that in a large city, but in a very small town it was cupcake overkill. I guess I was not the only one thinking it was overkill. One of the stores recently closed so now there is just one.

Kids do love cupcakes, well, at least most of them do. We have always had cupcakes for my niece and nephews at our family celebrations. We usually have the typical vanilla or chocolate cupcakes. This time I wanted to do a little something different. I remembered watching a cooking competition on television where the chefs were challenged to do something extraordinary with cupcakes. One chef filled the cupcakes with candy and I thought that was such a simple and fun idea.

The combinations of candies and cupcakes are endless. You can use the recipe below or your favorite cupcake and frosting. Choose whatever candies you (or your kids) like best. M&M’s? Gummy bears? Sours? I had some red & green M&M’s from Christmas I used with my cupcakes. Bake the cupcakes, cut a hole in the middle, fill it with candy, and frost the cupcake. It is so simple to make cupcakes with a surprise inside! 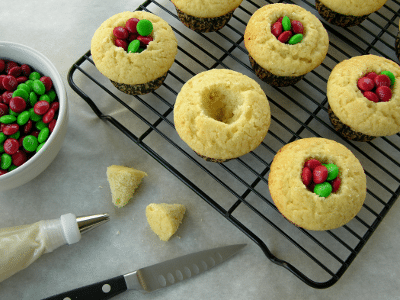 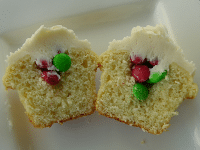 No one will know about the candy inside until they dig in. That is, if you can keep it a secret. Just sit back and watch the look on their face as they find the surprise inside. How fun! Who cares about sprinkles on top when you can have goodies inside? Okay, go ahead and use the sprinkles if you want. All a part of the clever disguise… 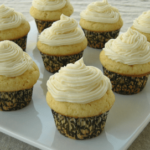 Cupcakes with a surprise inside are filled with candy are a nice surprise and a hit with kids both big and small.
Course Dessert
Cuisine American
Prep Time 45 minutes
Cook Time 30 minutes
Total Time 1 hour 15 minutes
Servings 12 cupcakes
Author Renee

Cupcakes with a surprise inside are filled with candy are a nice surprise and a hit with kids both big and small.

These are cute! They filled my mind with all kinds of ideas. Very creative.

Thank you Sheila. It is really a fun thing to do. No matter what cupcakes you make you can always add a little surprise on the inside.

Thanks Amy! As someone who loves both M&M's and frosting, this was a match made in heaven.