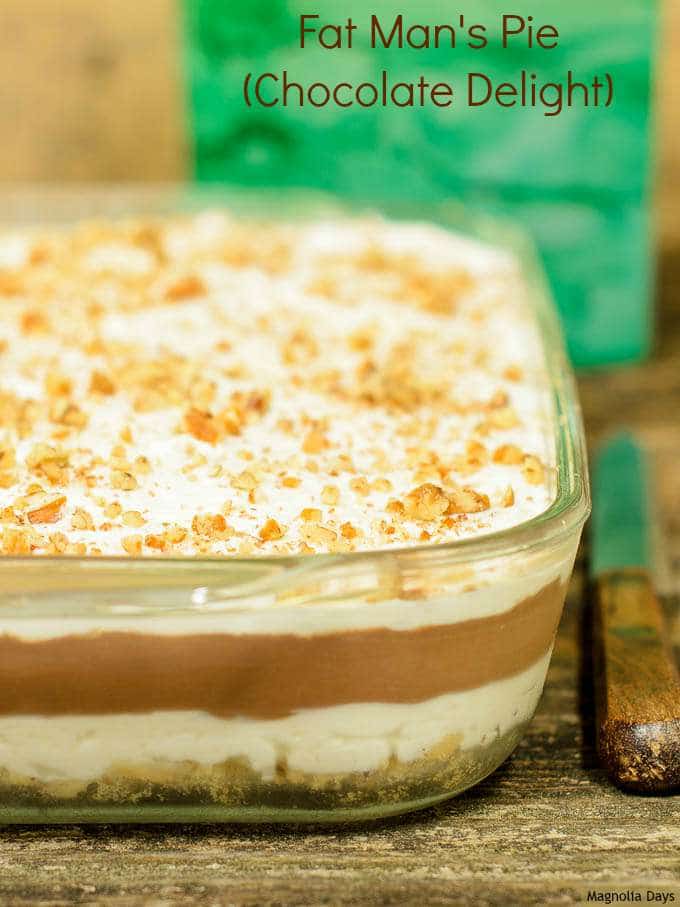 They were awakened by a sound in the kitchen. Dad got up to check out what was making the noise. He discovered it was from my brother making cinnamon rolls for breakfast. It’s interesting because that happened when my brother was about four years old. He has made many sweets since then. These days he is known for making a special dessert he calls “Fat Man’s Pie” and you may know it as Chocolate Delight.

My brother gave me his recipe. I also looked up similar ones on the internet. It appears this dessert is typically made with Cool Whip and instant pudding mix. Well, you know I had to take it up a notch. Perhaps it would be about four notches because after I was done it really is a fat man’s pie. It is the most heavy cream I have ever used in one recipe: 4, yes, 4 cups in total. That plus sugar, chocolate, and cream cheese means a total splurge. Be warned, this is not diet food in any shape or form. The title is beyond fitting. 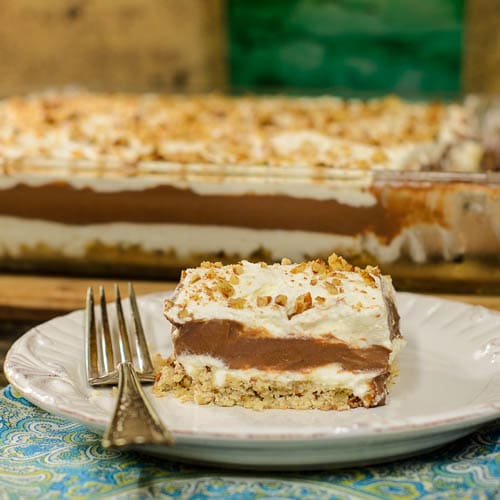 Why did I make Fat Man’s Pie? It is for a fun “Man Food” Sunday Supper event. I immediately thought of it because it is something one of the men in the family makes often for our celebrations. My brother is quite proud of it too. Or he just likes it a whole lot because I see him smiling when he is spreading the whipped cream on top just before serving. 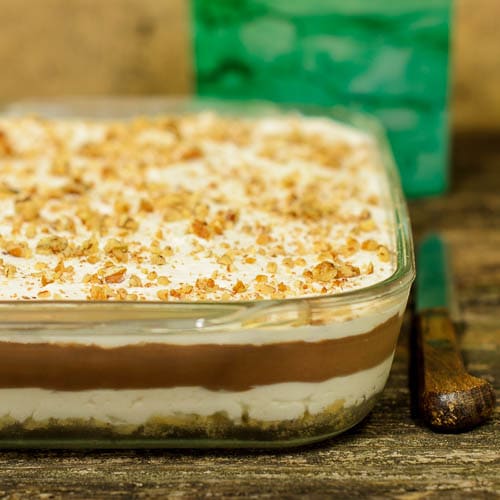 Re-vamping the recipe took some planning. A few weeks ago I made homemade chocolate pudding in preparation. I’m glad that part was a success. I only had to double the batch for this dessert. I also was sure to take my brother’s advice of chilling the crust before spreading on the cream cheese layer. My version takes a whole lot longer than his. However, the from scratch goodness is worth all the extra time and effort. 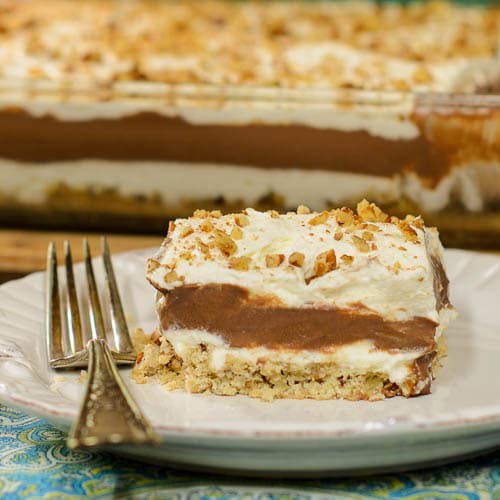 What do you consider man food? It certainly is a wide range of foods for Sunday Supper contributors. Scroll down to find a big list of ones with links to get the recipes. I’ll bet there were a lot of men quite happy about this event. I can imagine their smiles while enjoying the awesome dishes made just for them. One final note… take a look at my German Chocolate Cake that happens to be one of my brother’s favorites. A bunch of smiles have been sparked by it over the years. 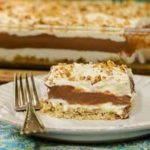 Time stated does not include overnight chilling time for pudding.

Are you ready for some man food recipes? Check out these by Sunday Supper contributors:

Oh my goodness Renee!! That looks so incredibly rich and creamy. I am afraid to make it, I might hoard it all to myself LOL

Too funny Bobbi although my husband did a great job of hoarding a lot of it for himself.

Your brother sounds swell! Loooooove this decadent recipe-and the fact that it's from scratch!

Thanks so much Kayle

I make something similar and its always a hit in our house! Delish!

Thanks Serena. It seems to be quite popular with many families and all with different names for it.

Good on ya for making a homemade version of the pie, Renee. I haven't bought a tub of Cool Whip in years! This looks sooooooooo amazing. It truly lives up to its name, not that I mind in the least. I don't think you could hold me back from seconds, thirds, fourths... Lol, and I just read Cindy's comment. I would definitely be a chubby girl after eating this (but it'd be worth it).

I refuse to buy Cool Whip and wish more people would take a minute to whip up real cream. And I'm also still smiling at Cindy's comment too.

I am so excited you made this from scratch it looks fantastic.

Thanks so much Laura