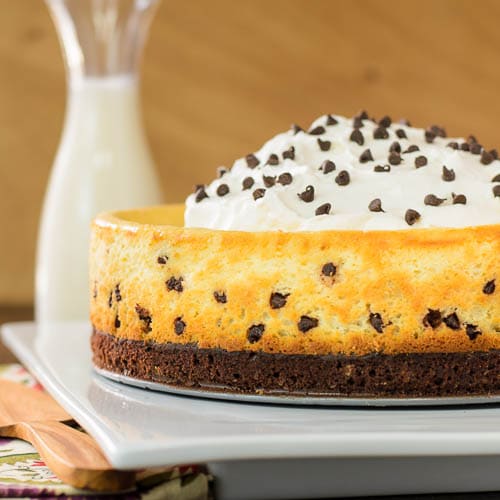 Chocolate and butter are melting over a simmering pot of water. The oven is on and a pan awaits batter. Cocoa, sugar, vanilla, and flour are on the counter by the pot. Across the kitchen on another counter are cream cheese and eggs warming up from their chill in the fridge. A mixer is positioned by a big bowl. Everything is ready for making a decadent dessert. A few spills and splatters later, it goes in the oven for a final bake. Next comes cooling and chilling. The hardest part is waiting to enjoy an incredible Brownie Chocolate Chip Cheesecake.

Everyone needs a little decadence from time to time. It’s something to look forward to and makes for a special celebration. It can also mark the start of a time of doing without. Such is the case with Fat Tuesday, a cherished day of indulgence before the Lenten season. Mardi Gras happens the day before Ash Wednesday. New Orleans throws the biggest celebration of it in America. Sunday Supper had to join in the fun with a Fat Sunday showcasing decadent, Mardi Gras, or New Orleans inspired food. 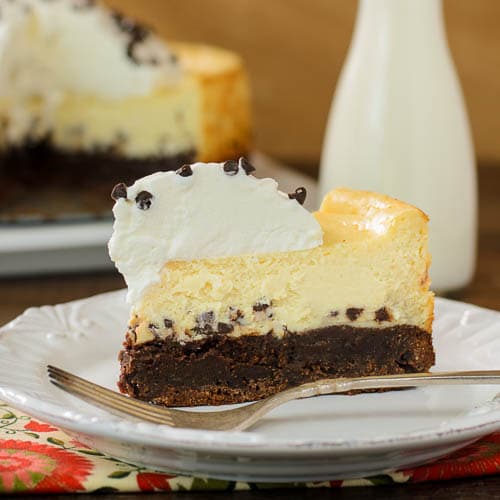 What to make for Fat Sunday? I had to go for the decadent option. First was deciding which decadence to feature. I considered something battered and deep fried for a split second. Butter-laden came to mind next. That took me to cream cheese and the possibilities with it. My thoughts went to cheesecake because of a recent discussion with my friend Terry and so I decided to go for the most indulgent one I’ve ever made.

Brownie Chocolate Chip Cheesecake has layers of richness. The original recipe is one I saved years ago and I believe it is by Eagle Brand®. Only thing is it calls for boxed brownie mix and I wanted it all homemade. I used the recipe for my Just-Right Brownie and it worked out just right. The brownie layer is fudgy and dense. The next layer is a creamy cheesecake filled with mini chocolate chips. The crowning decadence is real whipped cream which conveniently covered up a major crack in the top. (Oops. Shhh! don’t tell anyone). 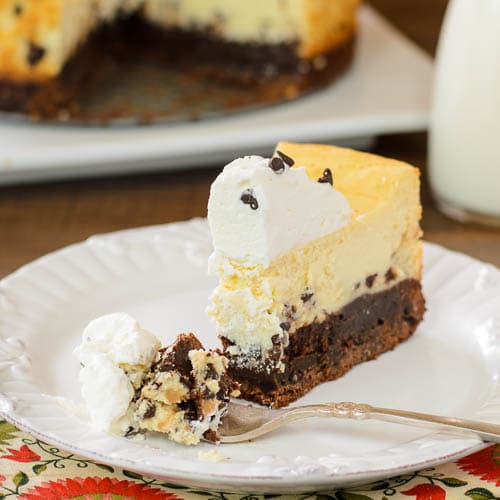 Do you celebrate Mardi Gras? I do only in the sense of using it as an excuse to eat something indulgent. Scroll down to find the list of Fat Sunday recipes by Sunday Supper contributors. Big thanks to Leslie of La Cocina de Leslie for hosting this fun event. 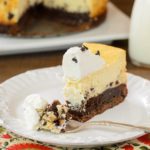 For the brownie layer:

For the cheesecake layer:

For the brownie layer:

For the cheesecake layer:

Time stated does not include chilling cheesecake overnight.

Are you ready for more decadent and Mardi Gras food? Check out these recipes by Sunday Supper contributors:

That looks so creamy delish I would break a diet to have a piece. Lovely!

Thanks Sue and it is worth breaking a diet just for a piece (perhaps a small one so you won't be breaking it too much).

Brownies and cheesecake are such a killer combo for me... I'd be dangerous with this!

It was dangerous having it around here too. I had to indulge on it several times.

Can you send me a slice? It looks amazing!

If I could send you a slice I would however I don't think it would ship well.

How can I even begin to describe to you how badly I want to eat this cake. When I come visit you, you will make this for me, right?

I'll make this and anything else you want when you come and visit me.

I need this in my life. RIGHT NOW. So yummy. Must make it.

I thought you would like this cheesecake Kim. I can tell you are a real cheesecake fan.