Home » Recipes » Side Dish » Baked Beans with Bacon for #SundaySupper 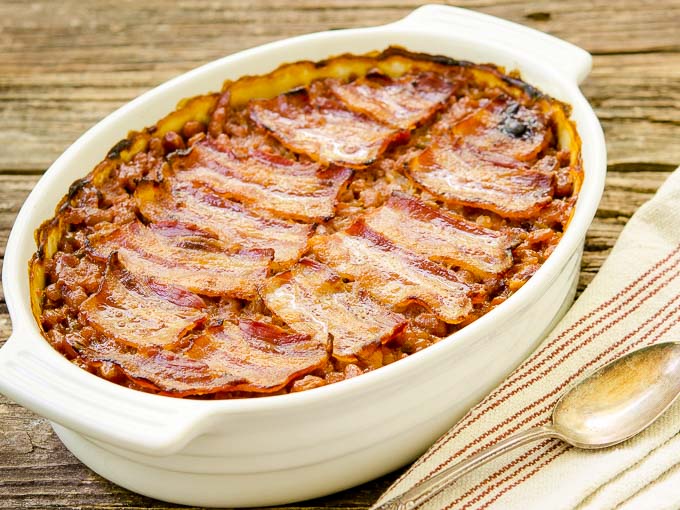 Thoughts drift back to summers long ago. They were simpler times for sure. The big to-do each day was to play and explore the great outdoors. There were plenty of potlucks and barbecues too. Baked Beans were always a part of them. It was a dish that simply had to be made. The meal would not be right without it.

A creek ran behind my parent’s house. It was a little creek being only a foot or so wide. I can’t tell you how many day we spent at it. We had grand plans of building a dam. That’s when we learned water is powerful. Water would build up then spill over and wash out our efforts in minutes. Yet it was fun. We tried and tried time and time again. We were playing and having a ball at it. 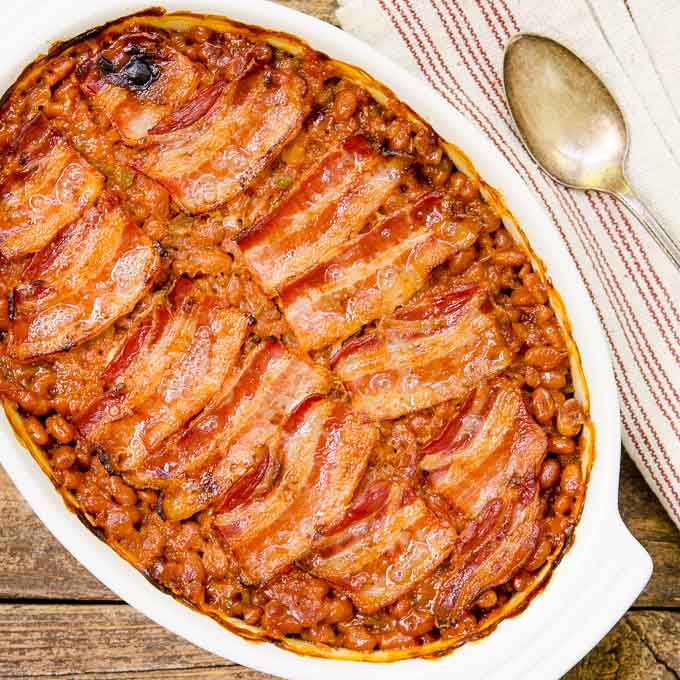 One time we decided to follow the creek to the end. What an adventure we had that day. We wound up in a big field where the creek ended. It was wider and deeper although not big enough to be a pond. We wouldn’t go in that deep part. It was too strange how it just ended there. We didn’t want to get sucked into an underground abyss. We tried figuring out how deep it was with tree branches. It didn’t work. We swore we’d figure it out one day. Did we? Nope.

About the Baked Beans with bacon on top. It’s one of those dishes my parents made since the dinosaurs roamed the earth. Well, maybe not that far back. At least before I was born. Baked beans have been made countless times over the years. Grilling burgers and hot dogs? Gotta have them. Ham for Easter? Gotta make them. Going to a potluck? Gotta take them.

An official recipe didn’t exist. We just knew how to make them. Drain pork and beans then stir in however much onion, bell pepper, brown sugar, ketchup, mustard, and Worcestershire sauce until it was “right”. Then top with bacon and bake. We’d adjust quantities based on how much we needed each time. I’ve made anywhere from 4 to 24 servings. Each time I’d just put in how much of each ingredient I thought was needed. So this time I had to measure. Just note you can adjust to your own taste. 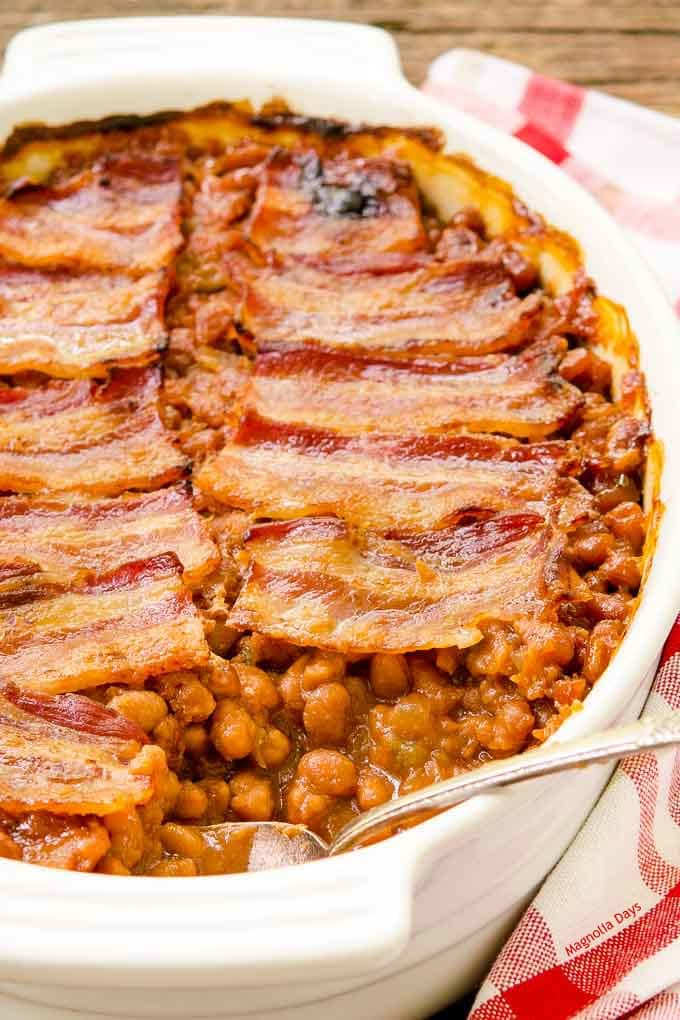 What is one of your nostalgic summer dishes? Which one brings back childhood memories the most? Scroll way down to find the list of ones by Sunday Supper tastemakers. There should be plenty of great stories attached to them. Big thanks to Colleen of The Readhead Baker for hosting such a heartwarming event. Also take a look at German Potato Salad and Mom’s Cheesecake for a couple of my family’s favorites. 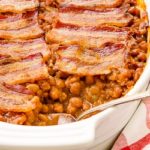 An easy way to drain the beans is to use the can lid to press down on the beans in the can then pour off the liquid that rises over the lid.

Childhood memories of summertime food are to be cherished. Take a look at these heartwarming and nostalgic summer recipes by Sunday Supper tastemakers:

NO NO NO NO!! You do NOT drain the beans, that adds to the flavors! No bell pepper, nor mustard! And cook diced bacon with the onion! And bake for 1 1/2 - 2 hours! I very seldom measure the rest of the ingredients, as it is a "to taste" kind of dish.

Hi there! Thanks for stopping by and sharing the way you make your baked beans. I like to learn about different approaches to recipes. I'll give your method a try the next time I make some.

I add molasses to the beans for a more robust flavor.

That's a great idea, Dorothy. I'll have to try that next time I make these.

Yess, baked beans are a must for any gathering. I always call dibs on the yummy bacon pieces too! Cannot wait to try this recipe!

This would be a huge hit for my husband. Love those strips of bacon on top!