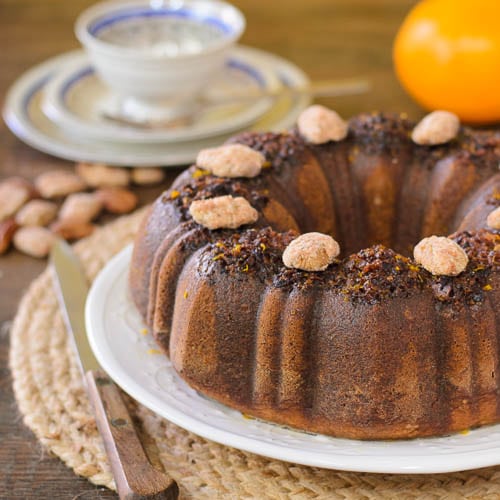 The delightful scent of orange fills the air. It is released with a fine mist as the grater scrapes across the orange’s surface. Rubbing the grated zest into sugar releases even more aroma. It’s as if an orchard has suddenly grown in your kitchen. The fragrance is soon joined with that of cinnamon when coated nuts are chopped into bits. That heavenly earthy/citrus combination is adored by many. The flavors are captured and highlighted with an Orange Cinnamon Pecan Cake.

Citrus season, holidays, and game days collide. At least they do with this recipe. Back during the holidays I received a sample of cinnamon spiced pecans from Billie’s Pecans. However they were put aside because I wanted to do something special with them. I knew exactly what it would be when the nuts theme for the inaugural Bundt Bakers event was announced. While the pecans themselves would be great for a holiday or game day snack, a cake made with them is even better. Utilizing orange because of it being in season is a bonus. 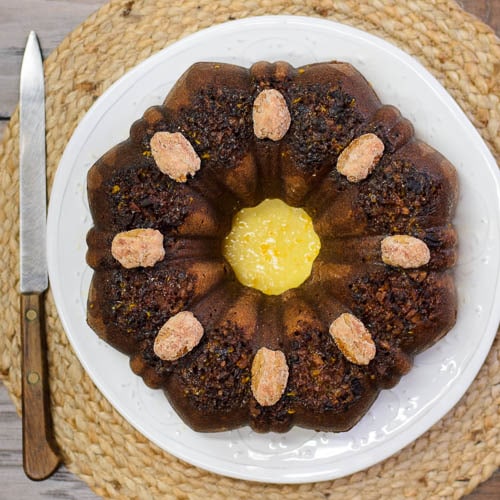 The cake has a treat at both ends. One end is crunchy from caramelized cinnamon sugar pecans. The other end is a super moist, even wet-like texture filled with a concentration of orange glaze. Choosing which to enjoy first or last is a difficult task. Start with the middle where the trio of flavors also reside and work your way to the ends.

For the inaugural edition of #BundtBakers, our theme and ingredient of choice is NUTS. We’ve got almonds and walnuts, pistachios and hazelnuts and lots of pecans! All baked into delicious Bundt cakes. Our host is Stacy of Food Lust People Love and she is also the creator and head of this wonderful new baking group. Take a look at the fabulous lineup of recipes from our talented bakers:

What is your favorite citrus and nut combination? Does the smell make you smile as much as the flavor? It does for me especially with baking a cake. Next time I bake Citrus Cocktail Mini Bundt Cakes I think I’ll add some mixed nuts just to have a plethora of lovely scents filling my home. 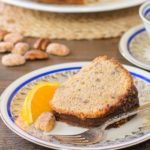 A recipe for Orange Cinnamon Pecan Cake. It is made with fresh orange juice and zest, cinnamon, and pecans and baked in a bundt pan. It is finished with an orange glaze.
Course Dessert
Cuisine American
Prep Time 35 minutes
Cook Time 55 minutes
Total Time 1 hour 30 minutes
Author Renee

*Some pecans may stick to the pan if using sugary cinnamon pecans. The sugar will caramelize and cause some sticking.

Recipe adapted from one in the Southern Living 1983 Annual Recipes cookbook (no longer in print).

What is Bundt Bakers? It’s a group of Bundt loving bakers who get together once a month to bake Bundts with a common ingredient or theme. Follow our Bundt Bakers Pinterest board for incredible bundt cake recipes and inspiration. 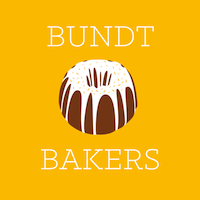 How is the monthly theme determined? We take turns hosting each month and choosing the theme/ingredient.

Would you like to join in the fun? If you are a food blogger, just send an email to Stacy at [email protected] or ask to join our private Facebook group.

Disclosure: I received a sample of Billie’s Cinnamon Spiced Pecans at no charge. I was under no obligation to post a review. All opinions are my own unless otherwise stated or contained within a guest post.