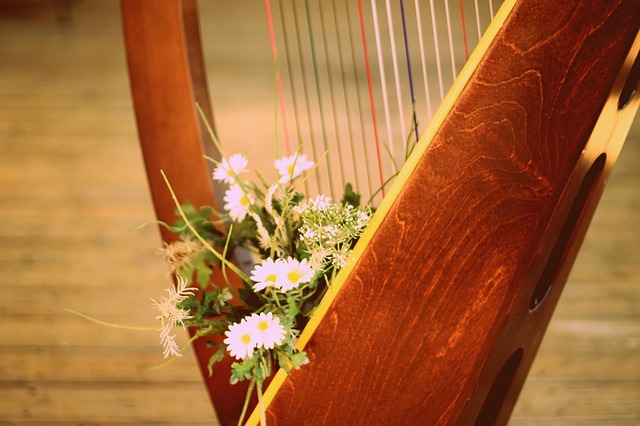 It’s Never Too Late to Learn to Play the Harp

Have you dreamed of playing the harp your whole life, but you’ve never actually gotten around to pursuing it?

I took piano lessons as a kid.  As an adult, I let my musical talents slide—other than singing along with the radio and soothing the kids to sleep with a lullaby.  Sure, I’d plink on the piano occasionally, but I never practiced seriously.

In the back of my mind, I always thought someday I’d learn to play the harp.  And then, one day, eight months into the year 2020, I decided that someday had become today.

The first hurdle was the cost.  Harps can be expensive!  Pedal harps run in the tens of thousands of dollars.  Lever harps start in the thousands.  What’s an aspiring harpist to do?

There are several excellent options if you’d like to own a harp.  The first is the Fireside Folk Harp.  With its light weight and sweet tone, this is the perfect harp to get started.  You can purchase it fully assembled for $259, or if you’re handy, you can purchase a kit and build it yourself for under $200!

The second option for purchase is the Harpsicle.  A new Harpsicle can be purchased for around $500, but secondhand Harpsicles pop up on Ebay frequently.  Watch out for new ones that don’t come from an authorized dealer; there have been occasional issues with counterfeit Harpsicles.

Another option is to rent a harp.  You can rent a harp from a musical instrument store, or from a local harp teacher.  Harp rentals run around $50 per month, depending on the particular harp, plus a security deposit.

Some harps have levers that allow you to change certain notes by a half-step.  What this means is that you can play in a greater variety of keys.  Do you need levers to start out?  No.  They’re handy down the road when you become a more advanced player.  At first, you’ll be playing only in the key of C, which doesn’t require any levers.

If you find a secondhand harp with levers that’s in your budget, it can be a wise purchase if you’re pretty sure you will continue to pursue harp as a hobby.  For example, in addition to the Harpsicle, you can look for a Sharpsicle (adds a few levers), a Flatsicle (adds more levers), or even a Fullsicle (all levers).  You can also add levers to the Fireside folk harp.

I was searching for a regular used Harpsicle on Ebay, but I ended up finding a used Sharpsicle for the same price, so I bought it instead of a standard Harpsicle.

Will I need to take lessons?

You can if you want to!  If you have a little bit of a musical background, especially if you can read music, you’ll be able to pick up the basics from books and videos.  But to get the hand and finger placement correct, it’s helpful to take at least a few lessons so you don’t develop bad habits.

Many cities have harpists who perform and teach.  Another option is to take a harp lesson online, via a Zoom class.  You can also watch a wide variety of YouTube videos that will teach you the basics.

I bought Teach Yourself to Play the Folk Harp by Sylvia Woods to start learning on my own.  The Harpsicle Harp Method by Darlene Walton is also a good place to start.  It can help to study from different sources, because you might find that one approach makes more sense to you than another.

What can I play?

There are dozens of harp music books with almost every kind of music you can imagine: folk, classical, spiritual, Celtic, children’s & lullabies, pop, and even regional music like Scandinavian, Asian, and South American.

There’s a wide selection on the Harpsicle harp music page, and also on the Sylvia Woods book page.

If I get really good, can I splurge on a nicer harp without busting my budget?

To be honest, this is how I motivate myself!  If I get really good, I will save up and get an even nicer harp.  There are some absolutely amazing harps out there if you can afford to splurge a bit.  The Dusty Strings Ravenna is a well-beloved model with lots of wonderful reviews.  Keep an eye on the Virginia Harp Center’s used harp page for deals on secondhand harps.

Do you dream of playing the harp?  Let’s chat in the comments!

This really does look so interesting! Surely going to try it someday.

Wow,I didn't know that harps could range from tens of thousands to thousands or that I could buy one for $200..This is so informative!!

wow! It's great to know all these details! I was always fascinated by harp!

This is a very useful info. I love Harp, I think it's a great instrument and I would love to learn to play it too.

I have seen harp playing only in movies, It is a really great insturments I wish I could learn.