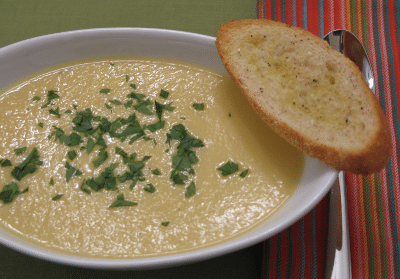 During an earthquake is when I first had cauliflower soup. We were on vacation in California. We had returned to San Francisco after a visiting Napa for the day. We decided to eat at a restaurant owned by one of the wineries. The soup of the day was cauliflower soup. It was so good I told the waiter to give the chef my compliments. The chef came out and thanked me and gave me some of the details of how he made the soup. I cataloged his information in memory and knew one day I would have to make cauliflower soup. The whole time at dinner my ears kept popping, badly. We found out later there was an earthquake at the very same time we were eating dinner. So earthquakes make my ears pop. Weird.

A cold front was on its way. I knew there would be day perfect for soup coming soon. I decided to make cauliflower soup. I had made it before using the information from the chef and my own basic soup knowledge (a.k.a. winging it in the kitchen). Preparations were in order, including buying a yellow bowl to put the soup in for photographs (plus green placemat and colored napkin). All I had was white bowls. Cauliflower soup is usually white and I thought a white soup in a white bowl on a white marble table would not make the best picture. I could post a photo of a white cloud and say it was soup.

Next purchase was the ingredients; 2 heads of cauliflower, onion, garlic, cream, and 2 containers of vegetable broth. I found some organic vegetable broth on sale. I had not used this particular brand before but I figured organic and on sale was a good combo. Everything was ready and it was the day to make the soup. First order of business is to cut up the cauliflower. When I cut the core out I looked down and saw green WORMS – Eeeeeeeeekk!!! 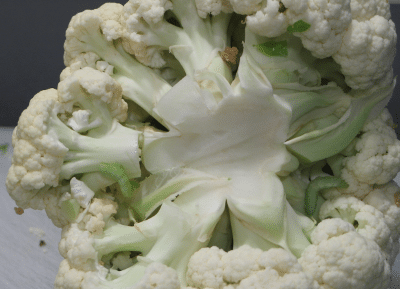 After the initial panic attack (I am terribly afraid of bugs), I had to go to the store to get another head of cauliflower. Yes, I did check the other one before I left and it was okay. When the soup making resumed, all was going good and I added the broth to the pot. Well, the broth was orange in color. They must use a lot of carrots or something to make the broth because all the vegetable broth I have used before has very little color. I looked in the pot and I realized the soup may not turn out so white: 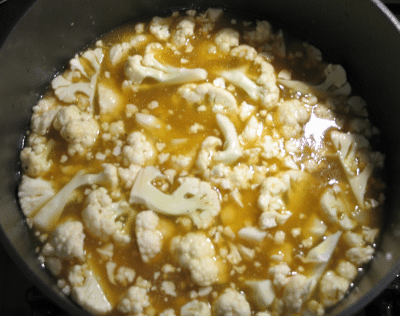 Que sara sara at this point. It may not be white but it will taste great. Looks like I got to use my white bowl after all (photo at top). After cooking the cauliflower until it is very soft/mushy, put it in a blender and blend until smooth.

One very important note: Do not fill the blender to the top and be sure to take the middle part out of the lid and cover it with a towel or several paper towels. When hot soup blends it expands. I forgot this one time and the top blew off and soup went all over my kitchen on the cabinets, counter, and floor. It was a giant mess.

Put the blended soup back in the pot to bring it back to a simmer. Taste it to see if you need to add more salt or pepper. You can enjoy it as is or add cream like I do to give it a little decadence. This batch was really good. While the organic broth made it yellow, it also gave it an extra richness. Take a look at this big pot of creamy, silky, delicious, cauliflower soup: 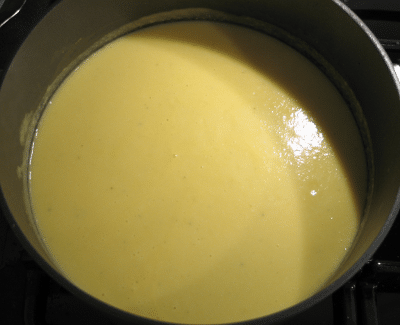 Leftovers freeze well and are nice for quick meals on busy days. Defrost, heat, and enjoy. It is much better than any soup from a can. Homemade trumps store bought any day of the week.

Do you make homemade soups? Have you had any interesting twists and turns while making soup? It was a day of colors and surprises when I was making this one. It was all worth it in the end. 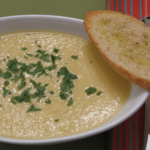 A recipe for a cauliflower soup; a delicious, vegetarian dish with a non-dairy option.

You deserve an award for actually finishing!

It was a unique day and experience for sure.

Mmmmmm! Looks and sounds delicious! I have been on a huge cauliflower kick lately and this seems the perfect addition to my new obsession :-)

Thanks! I hope you will try it. I'll eat cauliflower just about any way and I get on kicks of it too.

my goodness, between the bugs, the blender explosion, + the unexpected color, it sounds like this soup was full of surprises! i've actually had all three happen to me (though not at the same time), + i love that you did exactly what normally do -- roll with the punches (after shaking off the heebie-jeebie feeling from the bugs, of course.) it looks like it turned out just wonderful, so it was worth it! plus, it would be a lovely first course for people's upcoming thanksgiving dinners, so it was a great time to post it. =)

Thanks Amy! Yes, it would be a great first course for Thanksgiving dinner. It is not too heavy and fits with a lot of special dietary needs (vegetarian and non-dairy without the cream).