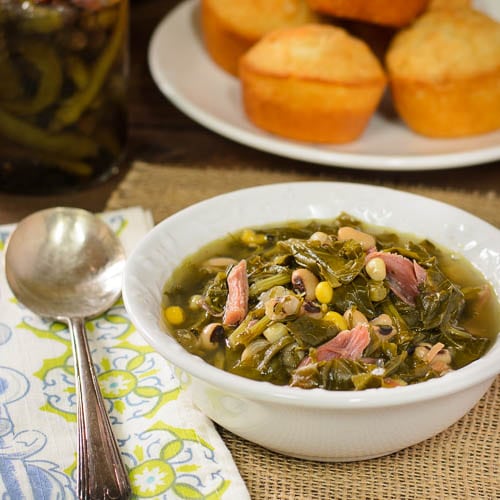 A ham bone was calling out from the freezer. It had been in there waiting to be used for flavoring a big pot of something. “Cook me now!” was a repeated whisper that turned into a scream. The only way to shut it up was to finally put it to use. Perhaps a batch of pinto beans? Or make ham stock? Then an idea came from a visit to a sandwich shop. They occasionally offer a turnip green soup that I’ll order every time I see it on the daily menu. It was time to re-create it at home and finally use that ham bone.

There was another reason to make this soup. When I posted the “Eat Your Greens” event information to the Sunday Supper contributors, I inserted in a little humor (or at least attempted it). The details started with “Celebrating the mighty turnip greens!” as if there would be an entire event focused on them. Then I went into the real details of celebrating green foods of all kinds. I thought this soup would be perfect for the event. Unfortunately I missed it due to being the same weekend as the WordCamp conference. Alas, I’m finally sharing it now. 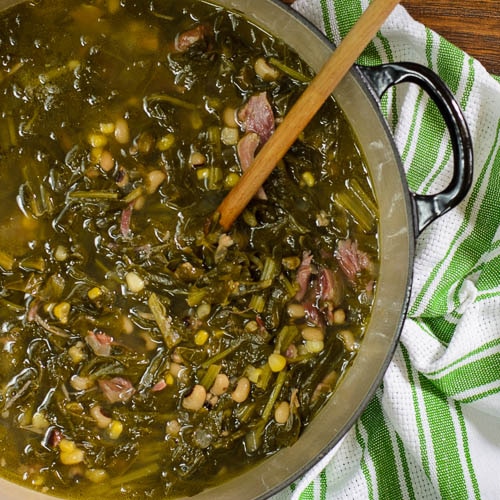 Turnip green soup is very easy to make. Basically all you do is put the ingredients in a pot and let it simmer for hours. There are black-eyed peas and corn in it to make it southern-style. It has a hint of heat from pepper sauce. To clarify, it is the sauce made with thin hot peppers that have been brined and packed with vinegar. This type of sauce is typically served with turnip greens and other southern foods. Serve the soup with cornbread for a complete and comforting meal. 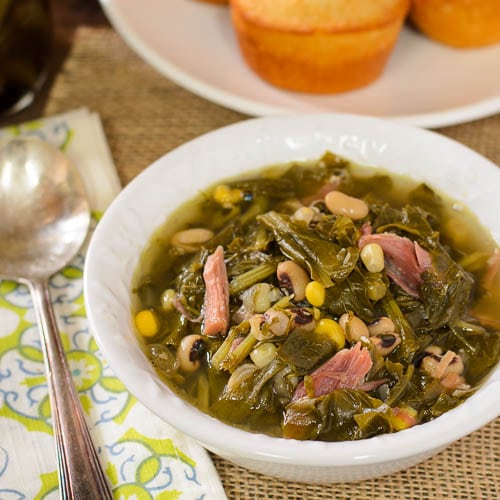 How often do you eat turnip greens? I do as often as I can. They are loaded with nutrients plus have antioxidant, anti-inflammatory, and cholesterol-lowering benefits. I cheat and buy the bags of pre-rinsed and pre-cut leaves. Be sure to rinse them thoroughly if using fresh-picked or in a bunch as they tend to have lots of dirt or grit on the leaves. 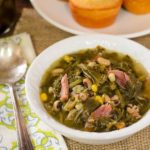 A recipe for turnip green soup made with fresh turnip greens, ham bone, black-eyed peas, onion, and corn. It is a southern-style soup for any time of the year.

This was really good! Making it our New Year's Day tradition since no one likes the collards alone, but with the soup and some cornbread it works! Thanks for sharing!

Thank you so much for coming back and letting me know how much you enjoyed the soup. I'm thrilled it will be a part of your New Year's Day tradition.

Now you're singing my song, Renee! I'm a southern boy and I love greens of any kind! This soup looks so delicious! I'm keeping this recipe! Awesome post!

Thanks Bill! Nice to see another Southerner that loves turnip greens.

G'day! This reminds me of a soup I enjoyed from my childhood and in visiting the South many times! Cheers! Joanne

G'day Joanne and cheers to you too!

That is one fine looking bowl of soup! You're wise about the nutritional benefits of turnip greens, but even more so than that, the taste is what keeps people coming back to them, right?

Glad you gave guidance about the type of pepper sauce you use. Here in Southern California, where we grown our greens, the most common pepper sauces are tomato-based (such as Sriracha or Mexican hot pepper sauces. (Although we're guessing your soup would be great with those, as well.)

We're going to highlight this on our Facebook page and link here so people can see how you made it, and your lovely photography. We invite you and your readers to come LIKE us on Facebook for more recipes and tips on super healthy greens like kale, chard, beet, mustard, turnip, collard and other green leafies. https://www.facebook.com/Cut.n.Clean.Greens. We also have a large collection of recipes for all sorts of cooking greens on our website, so we hope you'll browse around the find something new to try.

Wishing you a very green day,

Thank you so much and I really appreciate you highlighting the recipe on your Facebook page.

I remember your comment about turnip greens in the Sunday Supper event, and at the time, I thought, "We SHOULD have an entire event devoted to turnip greens. They are THAT good!" Your soup looks great, and I would like a bowl of it for dinner tonight!

Can you use collards instead of turnips?

Glad to know someone enjoys turnip greens as much as I do. Thanks Dorothy.