Are you taking your children to the theater to see a play?  Here are my top tips for a successful and enjoyable theater-going experience with kids. 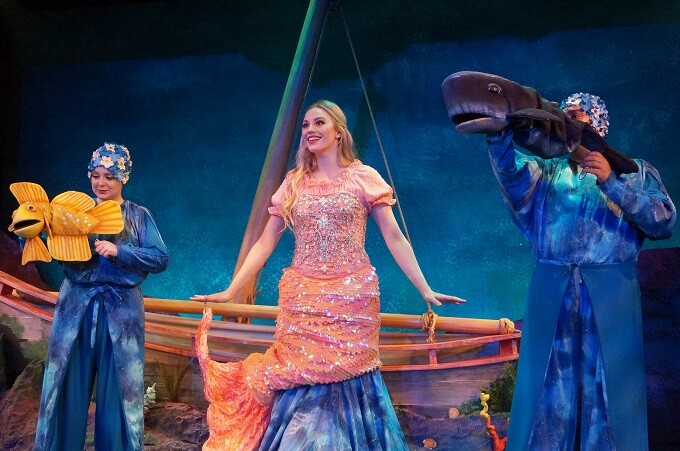 I love going to see plays.  I couldn’t wait until our kids were old enough to see their first play, and in the years that followed, it became an annual event for the four of us to go to a play.  This year, for the first time, we purchased season tickets to the Orlando Shakespeare Theater Children’s Series, which (in the 2018-2019 season) includes The Little Mermaid, The Jungle Book, and Jack and the Beanstalk.

Now that I’m a children’s theater-going veteran, I have some tips to share.  These tips will help you prepare to take your kids to a play.  There’s no need to be intimidated!  It’s easier than you might think, and you’ll cherish the memories of the plays you’ve seen together.

Tips for Taking Children to the Theater to See a Play

1. Find a theater and a show

There are theaters that are entirely dedicated to productions for children, and there are theaters that produce primarily shows for adults, but throw in a few children’s productions as well.  If you don’t have any theaters in your town, check the closest major metropolitan area.  Most theaters announce their upcoming “season” (the shows that will be produced over a certain time period) well in advance.

Not sure if a certain show is right for your kids?  Most shows that are billed as children’s shows are just that: shows suitable for children.  If you’re not sure, call the theater or check their website.  My favorite local theater, Orlando Shakes, has a very detailed content advisory for every show.  It’s quite helpful when you’re trying to figure out if, say, A Christmas Carol will be too scary for your eight-year-old.  Some theaters even offer special shows for children with sensory issues, like sensitivity to light and sound, or children with disabilities. 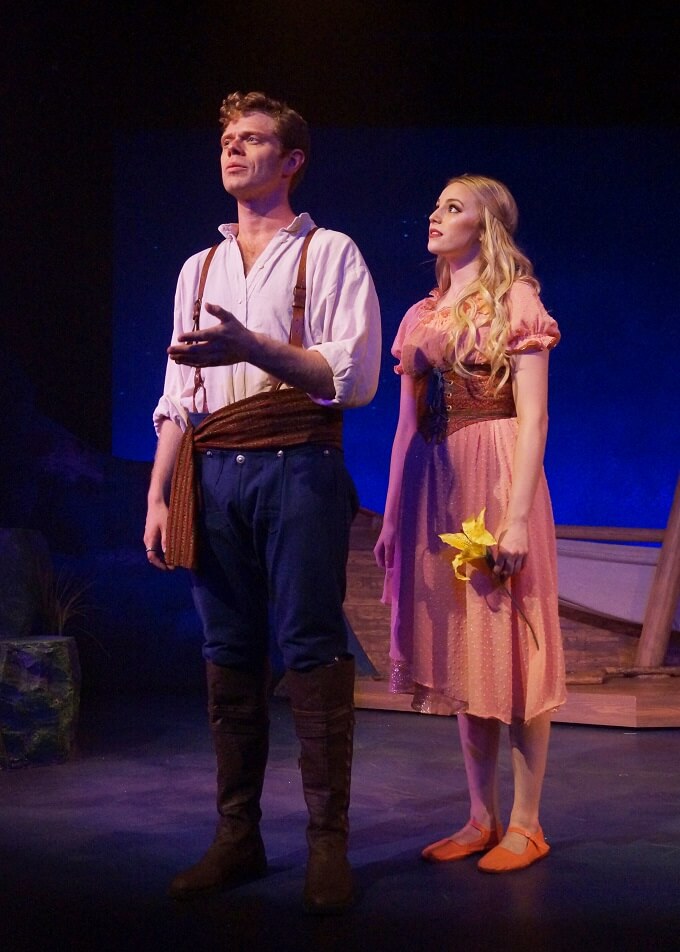 We happened to attend the sign-language interpreted performance of The Jungle Book, which featured the usual show with the addition of two professional interpreters at the very edge of the stage during the show, plus a short sign-language lesson prior to the show.  It was neat! 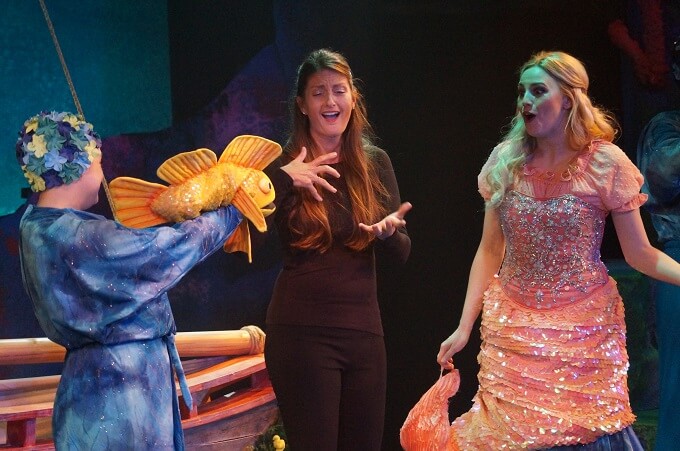 In most small to medium size theaters, there usually aren’t any “bad” seats—but I like to grab the best seats for the price when I possibly can. If the show is a large touring production, you may end up in the far back of the theater if you don’t buy your tickets early.  Shows can and do sell out, especially those that are popular or take place on a desirable day and time for families, like weekend matinees.  Most theaters sell tickets online via their own website, or you can also call and purchase tickets by phone.   Shop directly with the venue, not a ticket reseller, to avoid scams and price gouging (it happens).

“Building background” is fancy teacher-speak for doing some fun stuff that’s themed around the show you’re going to see.  If you’re going to see The Jungle Book, get some library books about monkeys, tigers, wolves, and panthers.  Have your kids watch an educational video about jungles, and then draw a picture of a jungle.  Sometimes, the theater website will have suggested activities or even printables for you to use.

Always overestimate how much time you need, because if you miss the curtain time (when the show officially starts), you may not be let in until the intermission—and that’s if there is an intermission.  Research the parking situation when you purchase your tickets.  Some theaters have plentiful parking near the theater; others, especially in urban areas or for large shows, have limited parking or require paid parking.  You’ll want to get there in plenty of time to park, get into the venue, and pick up your tickets (if necessary).

6. Visit the restroom right before taking your seats

Go before you leave the house.  Go when you get to the theater.  Go right before you take your seats.  It sounds silly, but it’s well worth avoiding that little tug on your sleeve after the show has started. 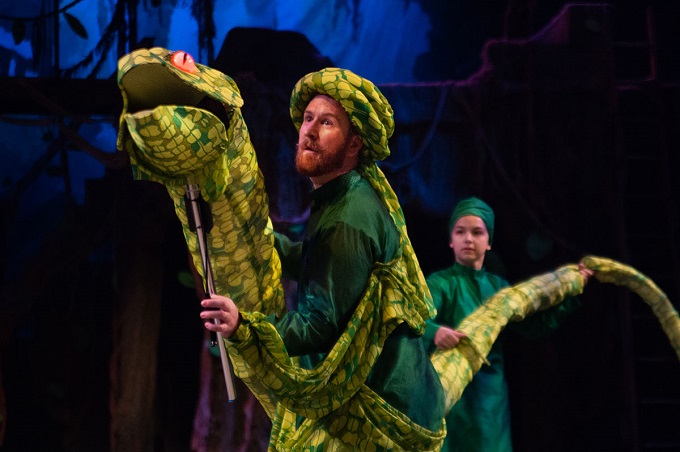 Every children’s production I’ve seen has involved periodic opportunities to clap, sing, gesture, or shout along, keeping the kids so engaged that they don’t even have time to think about misbehaving.  Most likely, you’ll just kick back, relax, and let yourself (and your little ones) be blissfully entertained.  If, for whatever reason, you need to exit during the show, don’t feel bad.  Theaters that produce children’s shows generally have staff and volunteers who understand that unexpected things just happen sometimes with kids.

8. Talk about the play

Wrap up your theater-going experience with a chat.  Ask your children questions that can’t be answered with “Yes” or “No.”

We like to go out to lunch after a play; for some reason, seeing a show always makes our kids hungry.  You could grab a bite to eat, or even just some ice cream, and sit down for a fun discussion. 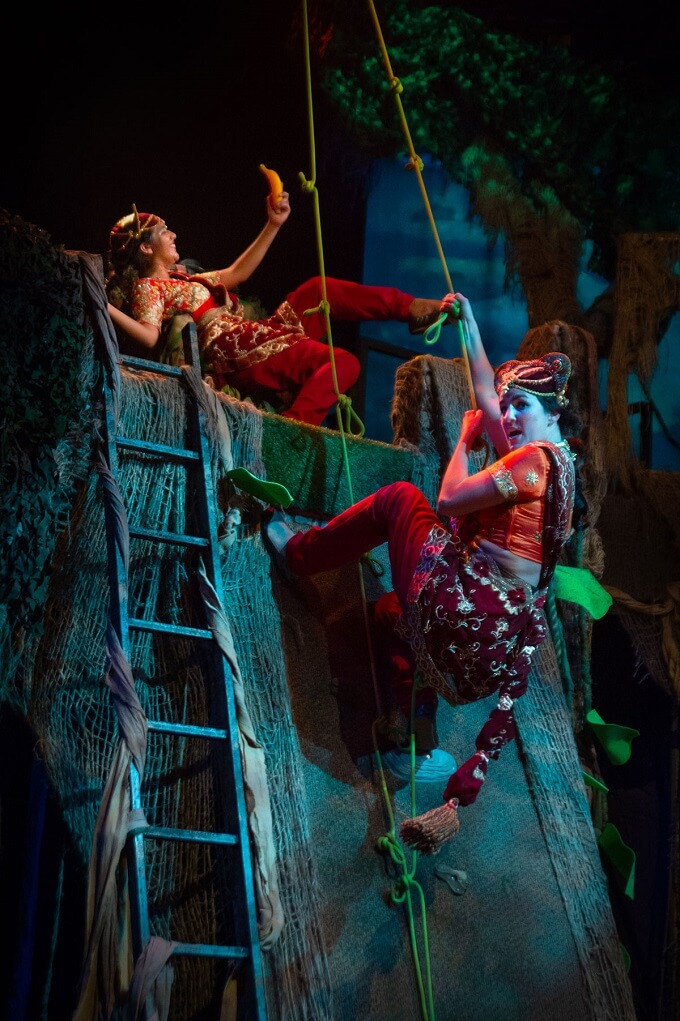 Now that you’ve been to a play with your kids, it’s time to start planning to go again!  This time, let the kids help pick out which show you’ll see.  You can even bring along Grandma or Grandpa next time and make it an extended family event.  It’ll become a family tradition that you can enjoy for years.  Ready for those season tickets yet?  You will be!

Share your tips for taking kids to a play in the comments!  And if you’re interested in the arts, you might enjoy this article about learning to play the harp.

I grew up in New York and attending Broadway plays was part of my childhood. Loving the theater has added immeasurable joy to my life. I love this post for not only encouraging attending the theater but also helping to make it an enjoyable experience for all.

Taking kids to shows like this would be so much fun. Thanks so much for the tips to make sure that it is successful.

I think taking kids to see plays or musicals when they are young is a great way to introduce them to different cultural experiences. I like the idea of getting interested and excited about the show by sharing the story before they go. A good way to keep them invested.

I love your tips. And, your photos are gorgeous. My older children use to love going to plays. My youngest well not so much! Maybe when he gets a little older and I'll have to try some of your tips!

Great tips!!! #4 building a background is something many will not even think about but so important, and fun! We took our 3 kids (ages 3, 3, 5) to see their first movie in a theater a couple of weeks ago and they did surprisingly well, though the 3 year old twins got a bit restless for part of it. But last week we saw an acrobatics show and they were all enthralled (though the 5 year old didn't nap and it was an 8pm show so he crashed halfway through haha!)