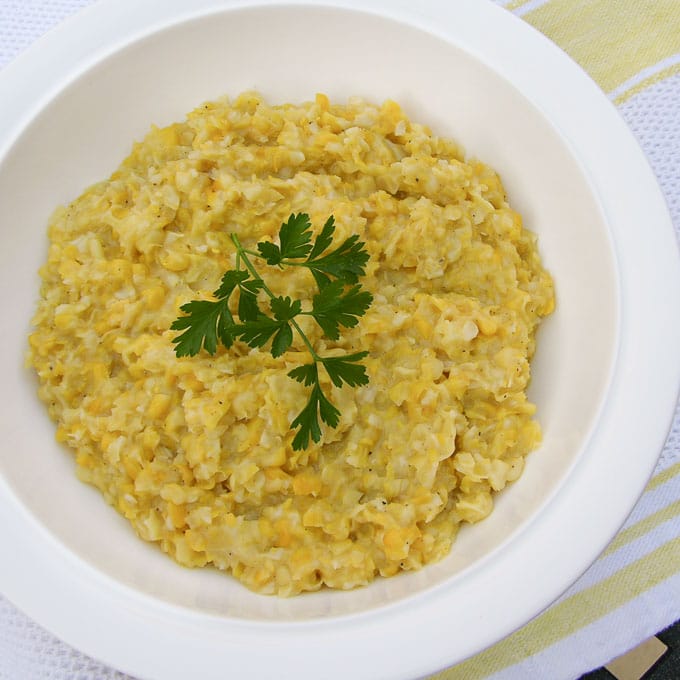 Here in the South we love corn. Every Southern style restaurant has it on the menu and the majority of the time it is creamed corn. When made right, it is delicious and nothing like the awful canned creamed corn. The best is made from fresh corn while it is in season. The kernels are cut right from the cob and every bit of milk from the cob is scraped off and used. 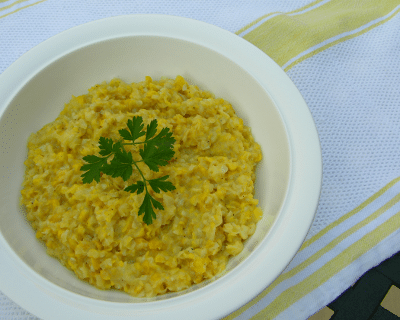 So what to do when corn is not in season? If you are like me, you did not buy extra corn last summer and freeze it. Probably should have but too late now. I discovered the next best thing to use – frozen corn. I use Birdseye® Baby Gold & White Corn from the freezer section because I like the mixture of both white and yellow corn for this dish.

After defrosting, a few pulses using the knife blade in the food processor and it is like I cut it from the cob myself. When you cut corn from the cob for creamed corn, you cut half the kernel and then go back and cut off the remainder. With this method, the key is to chop the kernels slightly with the food processor. Do not over process and get it to mush. It should look like this: 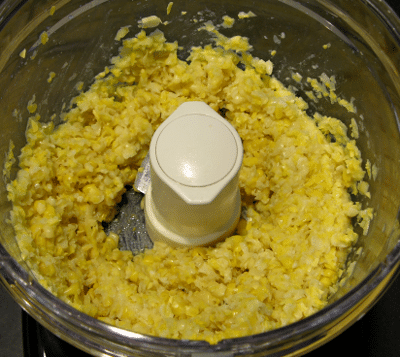 The recipe does not have cream as an ingredient. Sounds strange right? It is more a reference to the creaminess of the corn. Some people refer to it as skillet corn (it is cooked in a skillet). Only butter, corn, water, milk, flour, salt, and pepper are the ingredients. Simple. The true flavor of the corn is the highlight of this dish – a delicious side to any meal.

Corn is a staple in the South. Creamed corn is one of the ways we enjoy it. What is your favorite way to cook corn?  See also this creamy Southern corn side dish! 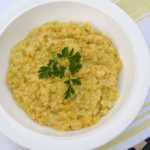 A recipe for Southern style creamed corn using frozen corn and made in a skillet (also known as skillet corn).

My mother-in-Law made creamed corm from the cob add milk, butter them use some corn starch to thicken it. My mom use cream of corm add crackers and butter it my flavor one.

I NEED TO KNOW IF I PUT THE CREAMED CORN IN THE FOOD PROCCESOR WILL IT PULVERIZE THE CORN....... I WANT TO USE IT IN A CLAM CHOWDER ...BUT I CAN NOT EAT WHOLE CORN......OTHERWISE I WILL ELEMINATE FROM THE SOUP...

Use the pulse button on the food processor and only press it a few times to chop up the corn instead of pulverizing it.

Creamed corn is a favorite of mine, but I am sad to say I always think of the canned version. I need to try your homemade recipe asap. It's a perfect side dish on these cold nights too :)

No more canned version for you. Once you try this you won't go back.

looks tasty! we ate this all the time growing up + believe it or not, i've never tried to make it myself. now that i have a recipe, i think i shall soon. =)

Oh good. It is the right size for a small family too. You can easily double it if needed. I have actually tripled it too. Takes a big skillet though.