Irish potato candy isn’t Irish and has no potatoes in it, but it’s still a delicious recipe for St. Patrick’s Day. Full recipe, video, and history included!

It’s not related to (and bears no resemblance to) the southern American type of potato candy, which actually contains potato.  Large-scale modern makers of Irish potato candy, such as Oh Ryan’s, use shelf stable buttercream instead of cream cheese, while smaller local operations like the Shane Candy Company continue to use cream cheese.  You can read an in-depth history of Irish Potato over at Eater, or continue on to get the recipe and video below.

This Irish potato candy recipe contains the classic ingredients of cream cheese, confectioner’s sugar, coconut, and cinnamon, plus a touch of vanilla extract for flavor.  It requires minimal kitchen skills and makes an excellent no-bake St. Patrick’s Day treat.  Just mix, shape, roll, and chill before serving.  If you want to add “eyes” to the “potatoes,” just poke in a few bits of pine nuts.  If you like this recipe, be sure to check out these Madeira Chocolate Truffles and these Cheesecake Truffles! 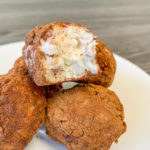 Irish potato candy isn't Irish and has no potatoes in it, but it's still a delicious recipe for St. Patrick's Day.

Press bits of pine nuts into the finished candies to make "eyes."

Thank you to CBDistillery for contributing this recipe.