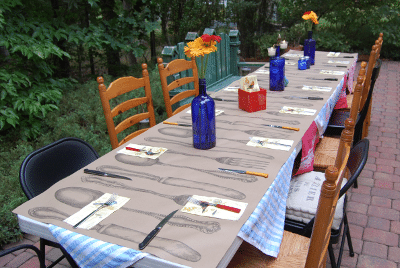 Our good friends and neighbors were moving. Chris and Faye had to relocate due to a job transfer. To wish them well and celebrate with them one last time before they moved, a farewell party was in order. Terry and Pam hosted the event at Terry’s house. It was a gorgeous day. Mother Nature had given a break from the heat and it was perfect for an alfresco dinner. The table was set on the patio and beautifully decorated. The cutlery printed paper table runner Terry had found at The Paris Market in Savannah looked so good! 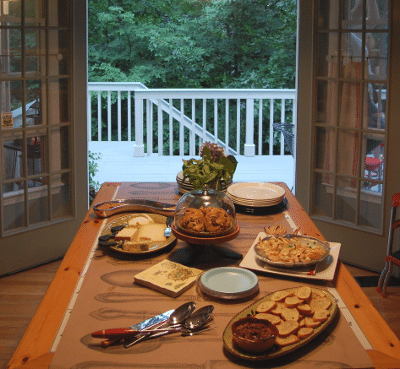 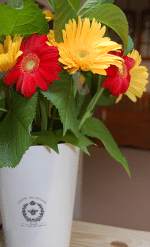 The evening started with cocktails and hors d’oeuvres. I made my citrus cocktail and the hostesses provided an assortment of white and red wine. Terry had made Shrimp Arnean, and I brought my Greek Olive Tapenade with crostini and a cheese tray with crackers. The cheese tray had 4 cheeses; Fromager d’Affinois Double Cream, Cave Aged Gruyere, Parrano, and Saint Agur Blue Cheese. The double cream is so smooth and buttery. The aged gruyere is dense with salt crystals. Parrano has a nutty flavor like parmesan and texture like gouda. Saint Agur is a mild and creamy blue cheese. I could have made a meal just from the appetizers. So good! 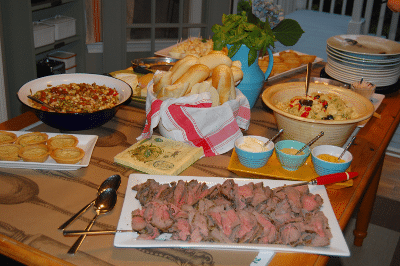 The main course was a terrific meal. Terry made a delicious Chimichurri London Broil. It was cooked perfectly and served with french bread. She also made goat cheese tarts, deviled eggs, and bean salad. I love her bean salad. I could eat it for days (which I did in the week after the party). Pam made a cheese tortellini salad with black olives and red pepper. We loaded our plates and went to the table outside to feast under the sky. 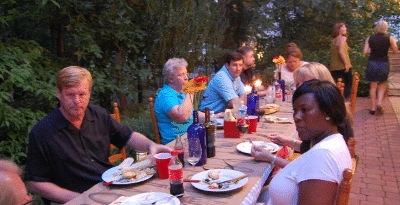 At the table: Jim (top of his head), Chris, Faye, Jay, Mark, Terry, me, and Gail. Behind the table: Pam and Michelle.

Mother Nature had to add to the party also. As we were finishing the main course, it started to lightly sprinkle rain. But no worries! Gail and I put our napkins on our heads and kept on having fun outside. Fortunately the rain stopped after a few minutes.

The desserts were just right for a summer evening. Our friend Michelle asked Chef Sam Pagán of MasLëon Cakes & Pasteries to make a special dessert for the party. Chef Pagán made a white chocolate mousse with fresh fruit and dark chocolate brownie. Faye had brought her 4-layer dessert made with layers of chocolate and whipped cream. Both desserts were light which was nice after a big meal.

As the evening went on we did some karaoke; singing, dancing, and laughing the night away. It was a fantastic evening filled with great friends, much fun, and delicious food. We will miss Chris and Faye in our neighborhood and look forward to seeing them again when they come back to visit. Many thanks to our hostesses, Terry and Pam, for the great party! Thanks also to Pam’s daughter, Mary Corrine, for taking the photos and capturing the evening so well.

Hi! What a super party! Sorry that you all lost a Super friend & neighbor ! I was wondering & hoping that the other delishious dishes at the dinner recipes are Shared they look so yummy! I love London Broil & bean salad .. Thank you for sharing ! Barbara.

The good news is that my neighbor is now back. We missed her being away and are so glad she has returned to our neighborhood.

cynthia at the daily basics

LOVING that runner - what a fun time and the food looks totally amazing! So enjoyed seeing this. Now, I am hungry.

Thank you so much Cynthia. It was a great night. I'm ready for another one.

The brown kraft table runner paper is a line called "CAKE". Here is a direct ling to it on The Paris Market's website. I also bought some black and white patterned placemats. http://www.theparismarket.com/category/dining

Thank you for the additional info Terry!

The brown kraft table runner paper is a line called "CAKE". Here is a direct ling to it on The Paris Market's website. I also bought some black and white patterned placemats.

Thanks! I loved the table runner too. So nice.