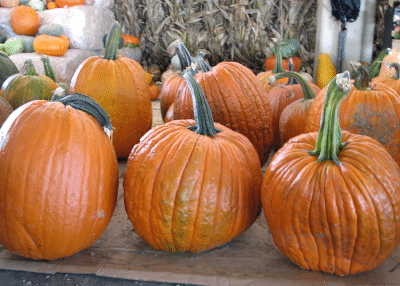 It is pumpkin and gourd season! As Halloween approaches, my friend Terry and I go on the hunt for pumpkins and gourds. Around mid-October we head to the State Farmers market to do our shopping. This year we went a little later than usual. The weather has been too warm and nice to think about pumpkin shopping. Later was fine, there were plenty to choose from.

The selection at the State Farmers Market is incredible. The market is 150 acres containing rows and rows of sheds with vendors selling produce, flowers, and other miscellaneous items. The PickYourOwn.org website has some good information and photos of the market.

The first pumpkin to catch our attention was this giant one shrinkwrapped on a pallet. I cannot imagine what it must weigh:

A large bin of mini pumpkins was next to the giant pumpkin: 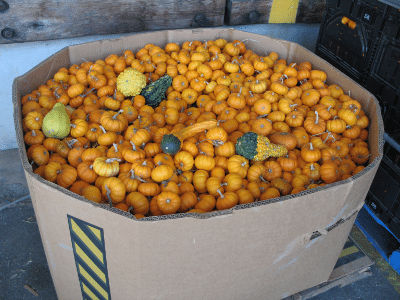 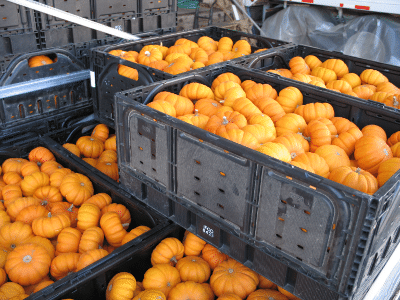 Around the corner was a great pumpkin, Charlie Brown: 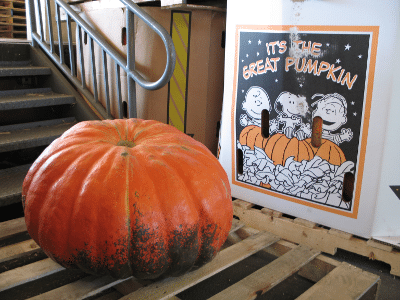 We scoped out all the pumpkin vendors. We decided on a vendor we were certain we had purchased from last year, Hammonds – The Pumpkin Man. It was his spot but he is no longer with us. His family must be carrying on the pumpkin business and made this pumpkin memorial for him: 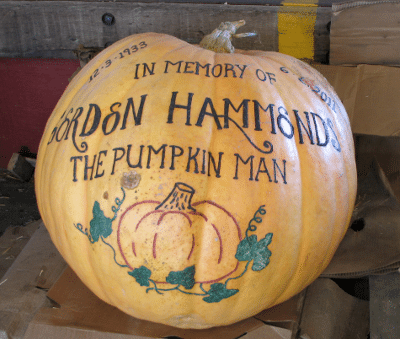 I spotted this unusual tall pumpkin with a dent around the top. I thought a creative person could do something with a tie or ribbon or, as Terry suggested, a bandana (pirate??): 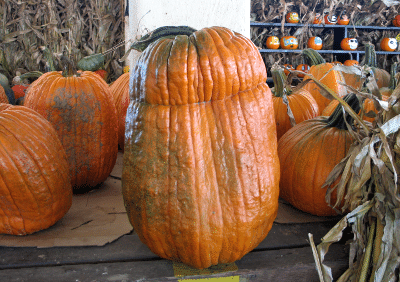 Pumpkin confession time. There are a couple of things I feel I should come clean about regarding pumpkins. First, I do not like the flavor of pumpkin. No pumpkin lattes, pies, cakes, breads, or seeds for me please. Second, I have never carved a pumpkin. A talented pumpkin carver could do this unusual pumpkin justice but not me. My first attempt at carving a pumpkin will have to be a simple, basic one. On the other hand, Terry is an artist and can visualize each potential face to be carved. She goes through and carefully selects ones with nice “hats” (stems) and shapes. She even dresses for the shopping occasion: 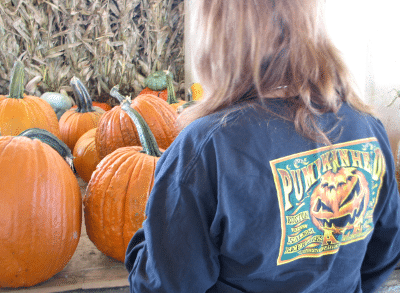 I look for little gourds; the cool, “alien” looking ones. This is what I rummage through to find what I want – crates of mini gourds and pumpkins: 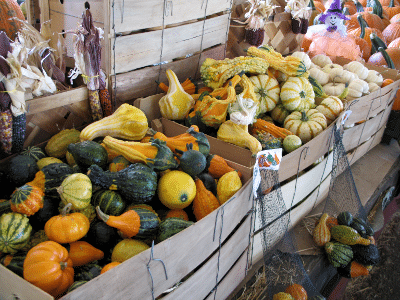 Our bounty is loaded in the back of Terry’s Jeep. Terry purchased an assortment of pumpkins; some to carve and others to place around her house for fall outdoor decoration. 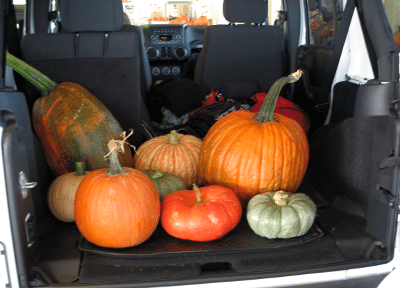 I make a table centerpiece with the gourds and pumpkins. I use a green leaf platter and arrange them on top. The centerpiece will stay on my kitchen table through Thanksgiving. The colors, shapes, and bumps are fun to look at while dining at home.

Do you like the traditional, round orange pumpkins or prefer the other colors, shapes, and varieties? For whatever reason, I like the weird-looking ones. My favorite was one I found last year. I looked for one like it this year but had no luck. It was really weird. I am still looking for exactly what kind of pumpkin it is (official plant name). No matter what the official name is, I called it Mr. Lumpy… 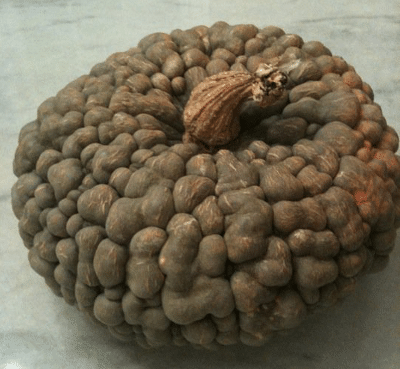 Happy Halloween! Are you ready? Do you have your pumpkins yet?

yes, we have our pumpkins! went + picked 'em ourselves over the weekend, which was a lot of fun. i can't believe that you don't like pumpkin foods -- i'm such a pumpkin junkie. =) i like it in anything + everything!

I keep trying pumpkin this and that but it just has an off taste to me. I love squash of all sorts though. I'll just have to keep on eating acorn squash and making butternut squash soup.

will always be, Mr. Lumpy.

Really wish I could have found another one this year. Oh well. There is always next year.