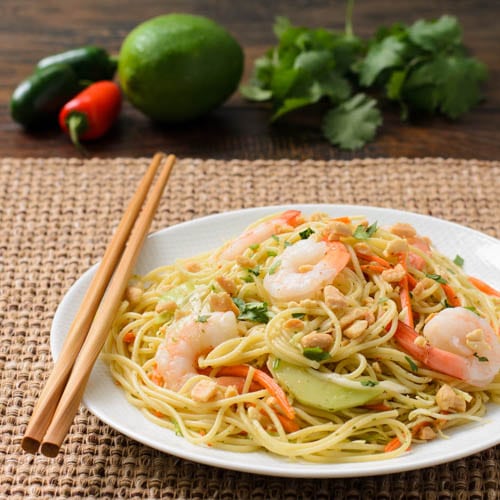 The bowl of green peppers was sitting pretty on the kitchen counter. The harvest from the jalapeño plant was a trophy of the success of my garden. Those peppers quietly called out to be used. Morning brought the surprise of a color change. One of them had transformed from green to red. The now colorful trophy became a sign to put the peppers to use. An overfilled recipe binder was pulled from the pantry. A few pages into the salad section is where the selection was found. Thai Noodle Salad With Shrimp was soon prepared and there was one less jalapeño in the bowl.

The lime cilantro vinaigrette is what makes this noodle salad. It has brightness of citrus, pepper heat, honey sweetness, and a touch of nutty peanut flavor. A whirl in the blender puts it all together. You can make it in advance for the flavors to marry and develop further. I plan to double or triple the amount next time. It’s needed if you have leftovers. Pasta soaks up the vinaigrette and sticks together. A little re-hydrating splash and toss is all it needs.

Thai Noodle Salad With Shrimp is the second recipe with my harvest. The first is spicy grilled corn salad. I have plans for kicking up the heat in a few more recipes. Red jalapeños would also kick up the color in a dish too. Experimentation and adaption in cooking is so much fun. How often do you change up a recipe? Is it to take advantage of the season’s produce or to use up food in the pantry? Either way, it’s how new recipes are developed and sometimes turn into all-time favorites. So go have fun in your kitchen and get creative! 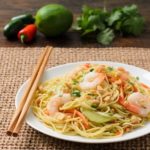 A recipe for Thai noodle salad with shrimp. Vermicelli pasta is mixed with carrots, cabbage, cucumber, shrimp, and a homemade lime cilantro vinaigrette.

Make extra vinaigrette to store separately if you plan to refrigerate leftovers and serve later. The pasta will soak up the vinaigrette and needs additional before serving again.

Recipe inspired by one in the October 2006 edition of Southern Living magazine.

Such a well-written and delicious post,Renee. Love your compare and contrast flavor profile, too. Another keeper from Magnolia Days!

Thank you Kim! Your kind words always make my day.

This is definitely right up my alley! Once my jalapenos are producing lots, I'll be making this!

Thanks Carla! It's such a great way to use the jalapenos.

This is beautiful, Renee. I love all varieties of Asian-inspired salads and noodle dish...and you're right, it's usually the vinaigrette or dressing that brings them all together. Yum!