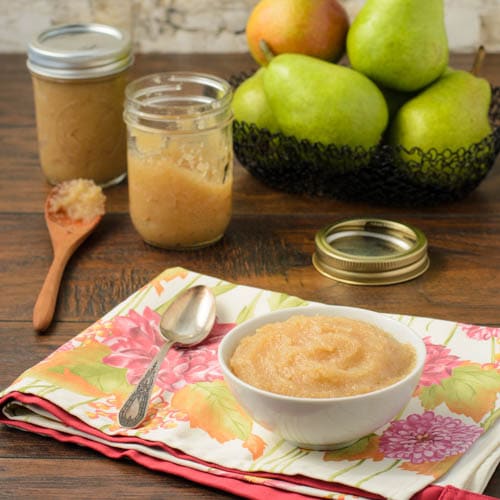 Fallen leaves lined the side of the driveway. The first signs of summer ending were already hinting of the season to come. Soon the deep greens of the landscape will transform to yellows, reds, and oranges. The colorful display nature gives in the fall accompanies as coolness in the air. Summer fruits and vegetables cease producing. It is already almost the case at my local farmers market. Tomatoes are few and peaches are gone. Fall brings a new set of produce and some are already making an appearance. It took spotting pears at the market to lead me to make spiced pear sauce.

Actually, it took more than spotting pears. It’s also because of a little bug put in my ear by my friend Michael. Well, more than a little bug. It was a clear and brilliant suggestion. We were discussing fruit trees and the upcoming harvest. He said “You need to make pear sauce”. First I was a little hesitant because I’ve not been a big fan of applesauce. It’s a texture thing. Plus all I’ve had is the stuff from a jar and that could be the issue. So I took on the task and I am now a big fan. 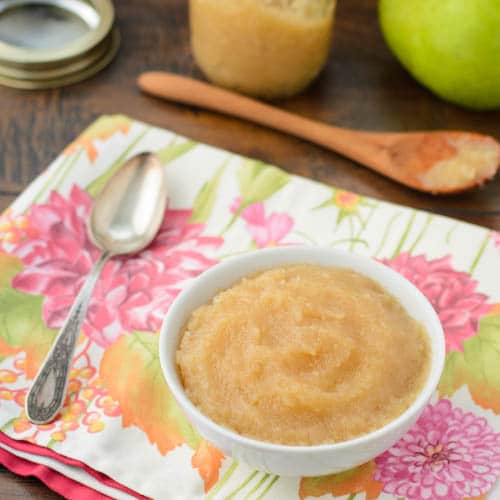 Homemade pear sauce texture is up to you. It will depend on how you process it and how much you process it. You can use a potato masher, food mill, or food processor. Each will give a different texture from chunky to smooth. My version is with the food processor and on the smoother end. It is quite thick which could be easily thinned down with a little water or pear juice. A touch of spice from cinnamon, ginger, and vanilla (the real stuff from vanilla seeds) adds warmth and an extra layer of flavor.

Are you ready for fall to begin? I’m not totally ready yet. Officially there are still a few more weeks of summer to go. The wet, cooler weather this year made it seem like it never really happened. At least there are wonderful fall foods to come. It will soon be time for baked acorn squash and butternut squash soup. My how time flies… 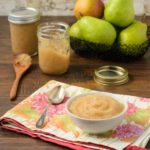 A recipe for spiced pear sauce. It is similar to applesauce but made with fresh pears and spiced with vanilla, cinnamon, and ginger. Enjoy as a side or snack.
Course Sauce
Cuisine American
Prep Time 20 minutes
Cook Time 40 minutes
Total Time 1 hour
Author Renee

A recipe for spiced pear sauce. It is similar to applesauce but made with fresh pears and spiced with vanilla, cinnamon, and ginger. Enjoy as a side or snack.

I would add a little pear schnapps for the last few minutes of simmering--cook off the alcohol but add some deeper flavor-- rewarm to put over that pear and almond cake with a little ginger ice cream on the side..yum.

Great suggestion Martha. I'll have to pick up some pear schnapps the next time I'm at the liquor store.

am going to make this today but I never buy vanilla beans...how much liquid vanilla should I use?

Use 1 teaspoon of vanilla extract but wait to add it after you cook the pears.

Just wanted to let you know I made this today and it was great! So a huge thank you for the recipe! I have two picky toddlers and was looking for a new snack idea and this was perfect. I did decrease the ginger to 1/8 just because I wasn't sure if it would be too much for them. It was perfect.

Thanks you so much Mary for coming back and letting me know how much you enjoyed the recipe. You really made my day!

I don't think I've ever had pear sauce. And I'm certainly not ready for the fall--how did it get here so quickly? I definitely want to try this, though--and it's one of those things that I'll probably end up eating the whole pot. Fortunately it won't be a big calorie expenditure :)

I really don't know how fall is approaching so quickly. It was May a few minutes ago. Or it seems that way.