I got to make a big ‘ole mess of greens. How the term “mess” became a descriptive word for a quantity is beyond me. I find it to be a humorous description for whatever reason. I hear it used most often by southerners. I only use it in association with southern food too. A big mess of lasagna doesn’t see to flow right. Anyway, the word mess was one of the thoughts I had while making a pot of Southern Collard Greens.

I had plenty of time to think too. Old-fashioned southern greens are cooked to death and then some more. It goes beyond greens too. Just about any vegetable didn’t escape being simmered to almost mush in the south. Yet southern cooking has changed over the years. I like both old and new. For this post though, it’s all about the old way.

Southern turnip greens vary a lot. Well, more than a lot. What goes into the pot of greens differs so much it is mind boggling. How long they are cooked can even depend on when they are picked. Greens picked after the first frost will cook faster. They can also be less bitter. How greens are seasoned can be with ham hocks, ham bone, salt pork, bacon, chicken broth, smoked turkey, and more. Beyond that some add onions, pepper sauce, and other spices. 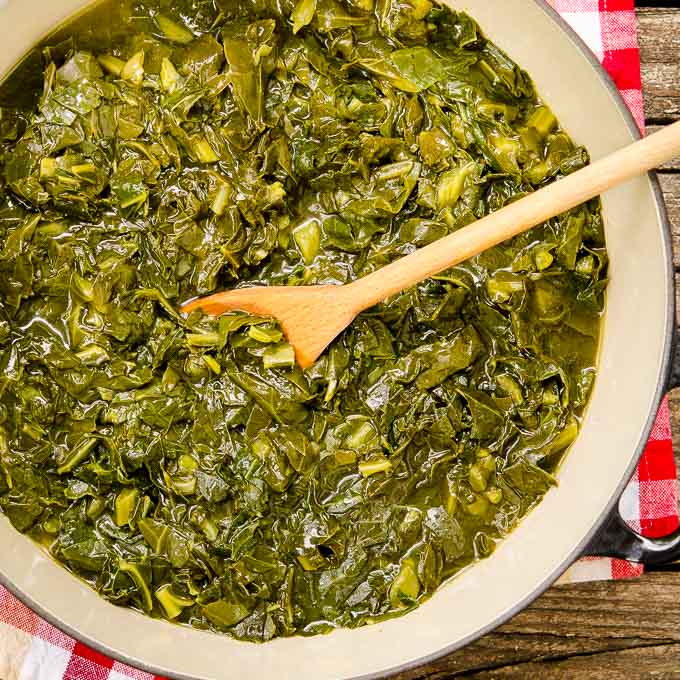 I called my mom before making the collards. I wanted to find out how her and my dad made them. She said most often it was only greens, water, and either fatback (salt pork) or bacon. Then she handed the phone to her helper Jenny. She uses chicken broth because she usually doesn’t have fatback on hand. Then she told me about something I’ve never heard before. She said if they are still tough and bitter after cooking a while to add a teaspoon of baking soda. Then cook for an additional 15 minutes.

I first decided to use salt pork like my parents did. Then while at the store I spotted smoked ham hocks. I knew they would work just as well or better because of the added smoky ham flavor. I got the hocks and a two pound bag of shredded collard greens. Yes, I went for convenience. Rinsing collards is a chore. You have to do it at least 4 times to get out all the grit. Then removing the center stalk from each leaf and chopping takes a while. Opening a bag is so much easier.

First step is to cook the ham hocks. Doing so softens the hocks and flavors the water. At the end of cooking the greens you will have this scrumptious liquid called pot likker. Sop it up with cornbread, biscuits, or rolls. You can also save it to use in soup too.

I cooked the collards for over an hour. I tasted them and they were still a little tough and bitter. So I added the baking soda and it was like magic. Minutes later they were just like they should be. Oh, and serve them with hot sauce. The kind of hot sauce that is pepper juice. Look for a bottle with small peppers and clear liquid.

Southern Collard Greens are a classic for my region. It was what I knew I had to make for the Sunday Supper Regional Specialties event hosted by Sue of A Palatable Pastime. It’s fun to see what recipes are being shared for which regions. Scroll down to see the list. Each recipe is a click away. Also look at Hoppin’ John, Butter Beans, Chow Chow, and Turnip Green Soup for more southern recipes. 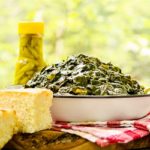 Look for bags of shredded collard greens in the produce section. If using whole collards, rinse thoroughly a few times to remove dirt or else the finished dish will be gritty. Remove and discard the center stalk from the leaves then cut leaves into shreds (will add to prep time).

It’s time to discover food from different regions. Take a look at these regional recipes by Sunday Supper tastemakers. There is such a tasty variety:

I've actually never had collard greens! My husband grew up in Alabama and he can't remember eating them (then again he didn't eat much green food before I met him). I should probably give them a try.

I absolutely love these greens... along with rapini and swiss chard. Great vegetables! Thanks for sharing :)

I've only made collard greens once without success - I will be trying this soon!

I've come to like collards, especially with ham hock, and it's funny to think I'd never even heard of them a few years back. These look great.

I love collards with a lot of vinegar. Bacon or ham hocks make them soooo good! I never heard of the baking soda trick. It makes sense to me!