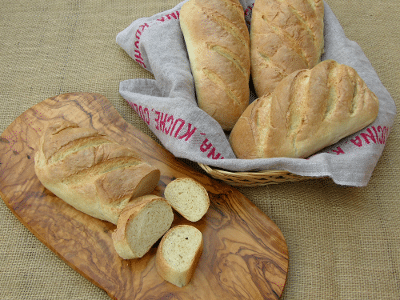 Have you ever baked homemade bread? If not, you should give it a try. Bread baking is not as difficult as it seems. It does take time though. You can plan on several hours from start to finish. Some of those hours are the time it takes for the dough to rise a couple of times and baking time. The end result is truly worth the time spent. The first time I made bread my husband came home from work a few minutes after I pulled it from the oven. He proceeded to slice it and ate a half of a loaf right then and there. Just seeing him devour the bread made my day.

After several types of bread loaves and rolls, my next adventure was sourdough. To make sourdough bread you need a sourdough starter. There are several places you can order it from on the internet or you can make your own. A few sources are:

I made my own starter. Meet Bubbles: 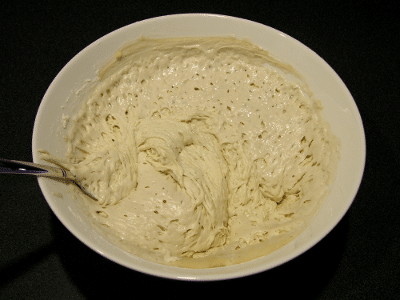 Bubbles is approaching 7 years old. I decided to give my starter a name after feeding it for so many years. Bubbles seemed appropriate since that is pretty much what starters do. Bubbles was made with flour and water. In the world of starters, mine probably ranks up there with one of the most neglected ones. I forget to feed it regularly. But that is the great thing about starters; even the most neglected can be brought back to a healthy life. The other great thing is that no two are alike. They all taste different depending on several factors including where you live.

The recipe calls for both dry yeast and starter. The combination gives it a little faster rise along with the sourdough flavor. It is one from “The Red Star Centennial Bread Sampler” cookbook. I adapted the recipe to include the use of a stand mixer in the method and make 4 smaller loaves instead of 2 long ones. I do so because we only need a small portion for the two of us. I wrap the remainder in heavy duty aluminum foil and freeze. The smaller loaves also are great for sub sandwiches.

I took a bunch of photos while making this bread. If you would like to see the unedited photos then click here -> Sourdough French Bread Photos. Keep in mind I am an amateur bread baker. Even though I have baked bread for a while I do not bake it often. I am putting the photos out there just in case they help someone who has never went through the process before. Sometimes it helps to see a visual of the process.

Give bread baking a try if you have not done so before. You will be surprised as to how rewarding it can be. And Mmmmmm! the aroma of fresh baked bread coming from your oven. So worth it. Are you ready?

Grease a large bowl and set aside. Grease a cookie sheet and set aside. In the bowl of a stand mixer, dissolve yeast in warm water (110° to 115°) and let sit for 5 minutes. Add 2 cups of flour, starter, sugar, and salt. Stir together using the flat beater on a low speed. Change flat beater to a dough hook. Add flour ½ cup at a time until you have a firm dough and the bowl is “clean” (dough has pulled in all the flour). Continue kneading with dough hook for about 5 minutes. Put dough on a lightly floured surface and knead by hand a few times to make sure it is smooth and elastic. Shape into a ball. Place in the greased bowl and turn to coat dough ball all over. Cover the dough loosely with plastic wrap and set bowl in a warm spot. You can also cover it with a towel. If you have an oven with a proof setting then you can use it for the first rise. Let dough rise until doubled, about 1 to 1½ hours.

Punch down dough. Divide into two equal parts. On a lightly floured surface roll the dough out to a 12″ x 5″ rectangle. Starting with the longer side, roll it up tightly and pressing down while rolling (to prevent holes inside the bread). At this point you can pinch the edges and ends to seal if you want 2 long loaves or cut in half before pinching and sealing to make 4 smaller loaves. Once sealed, place dough on the greased cookie sheet. Cover with a towel and let rise at room temperature until doubled in size, about 45 to 60 minutes.

About 30 minutes into the second rise, pre-heat the oven to 400°F. Once the loaves have doubled, make a few diagonal slashes across the top of the loaves using a sharp knife. Spray the loaves with cold water. Bake at 400ºF for 30 to 35 minutes until golden brown. For extra crispy crust, spray cold water several times while baking (about every 10 minutes). Remove from cookie sheets, cool, and enjoy.

I made these yesterday - they came out delicious! I made a few mistakes, my fault, that resulted in them not looking like yours. We had a last minute change of plans to visit in laws instead of staying home, so during second rise they were in the cold car for about an hour. After getting back into warm house they rose a little but I doubt that was good. I didn't have a mister or spray bottle, so I dabbed with water before putting in over but not during baking. I also don't think I initially rolled it like you explain. So - delicious recipe, and I'm going to be making it again. But I still have a few more attempts I think before I get them as pretty as you :)

Thanks Chris! I'm sure the time in the car and temperature fluctuations affected the bread results. The mister bottle I have is a little cheap one I found in the grocery store. You can find them in hardware or home improvement stores also. Misting/spraying the loaves during the baking really make a difference in the crust. At least the flavor was great and I am glad you will try making the bread again.

I made your sourdough French bread yesterday and it was amazing. The two loaves were beautiful! I took one loaf to my parents house last night for dinner and will be taking the other one to my father-in-laws house tonight for him to eat during the week. They were so easy and tasty. Thanks much for the fab recipe!

That is such great news! I am so glad the recipe worked well for you. Thank you so much for letting me know.

Thank you so much for this recipe. How did you know I was going to bake sourdough bread today? I just printed your recipe and have decided to make it today. I'm excited. I got the recipe for my sourdough starter from Jen at My Kitchen Addiction and have made her recipe before too. Very delicious! I'm looking forward to making yours as I enjoy a good French bread from time to time :) Thanks again!!! BTW, nice name you have there. LOL

Nice to meet you, Renee. Not a lot of Renee's out there. Hope you enjoy the french bread. Let me know how it turns out.

Nice to finally meet Bubbles lol :) Love the photo of your finished bread too, look great! My baguettes don't look this good yet.

Thank you Chris! I'm feeding Bubbles right now and making sure I have extra so I can try your sourdough pizza recipe. She will be all ready for pizza town after her next sleepover in the fridge.