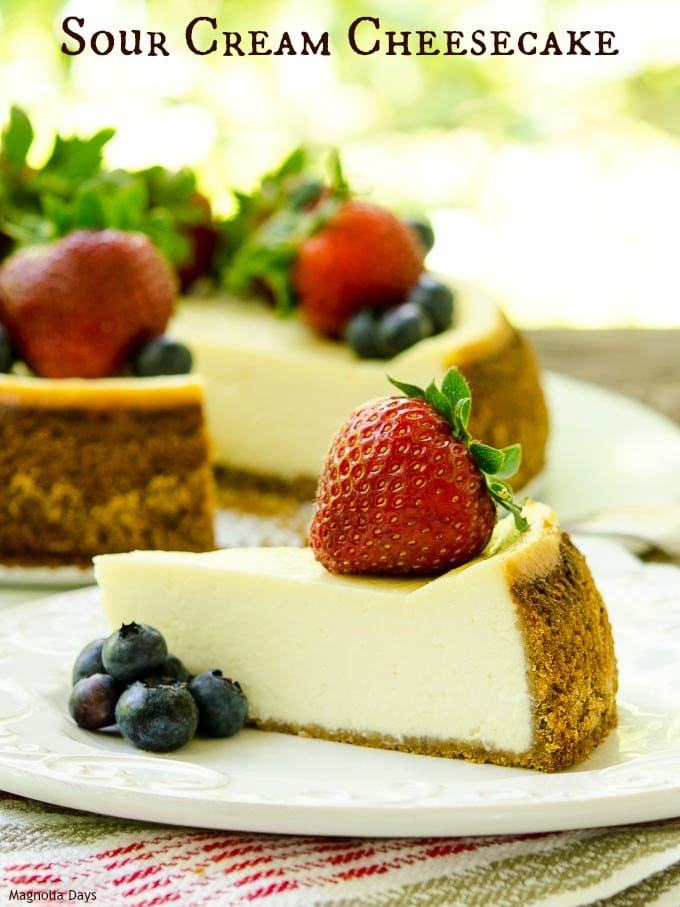 Like mother, like daughter. I have no idea where that saying originated. Sometimes it is spot on. Other times, well, not so much. I remember when I was a kid and my Oma came for a visit. Mom was so excited to show her the house that she ran into the sliding glass door. We kidded her about it for years. Then guess what? Right after we added the sunroom to our house, I ran into the sliding screen door. When it comes to cheesecakes, my mom always had success. I’m the opposite. There was yet another disaster in the making of Sour Cream Cheesecake.

First a little back story on my mom’s cheesecakes. There were two she made for years. One recipe I’ve shared before as Mom’s Cheesecake. If you look at that post you will see the disasters I had making it. The other recipe is the one I’m sharing now. It’s my mom’s favorite. And sure enough, the first one I made was a complete disaster. There were cracks so deep they almost went down to the crust. 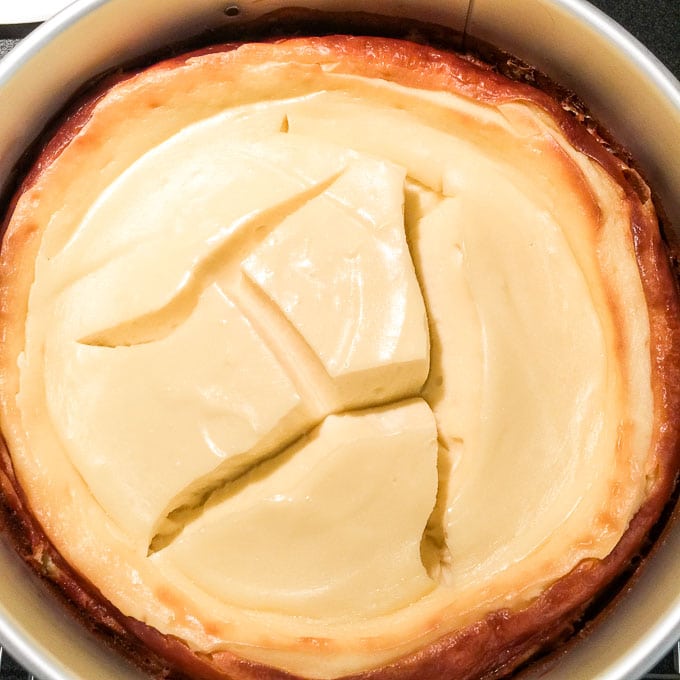 Even the crust went wrong. The graham cracker crust didn’t hold together after baking. It was a crumbly mess. I had no idea why the filling cracked so badly. I followed the recipe exactly. The cheesecake puffed up so much while baking it rose higher than the sides of the pan. Then it fell and cracked within a few moments after taking it out of the oven. I posted the failed cheesecake photo on Instagram and Facebook.

It’s good to have foodie friends. My fellow food bloggers saw the failure and offered advice. I had a lengthy discussion with Anita of Hungry Couple. She suggested a completely different method for mixing the batter. So off to the store I went to get the needed ingredients. The next morning I baked the second one. It was a total success. 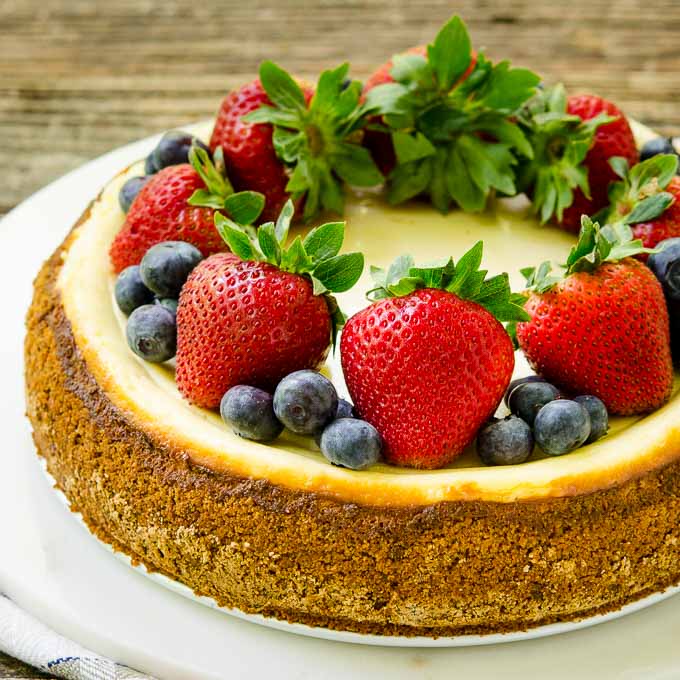 What changed in the process? For the crust, I slightly reduced the amount of graham cracker crumbs and increased the amount of butter. For the filling, I used a food processor instead of a mixer. For baking, I opened the door slightly during the last 10 minutes. That may sound odd. The original recipe said to turn off the oven after 35 minutes and let it stay in the oven for about 30 minutes. So the change was after 20 minutes I opened the oven door a little to let the temperature slowly come down. 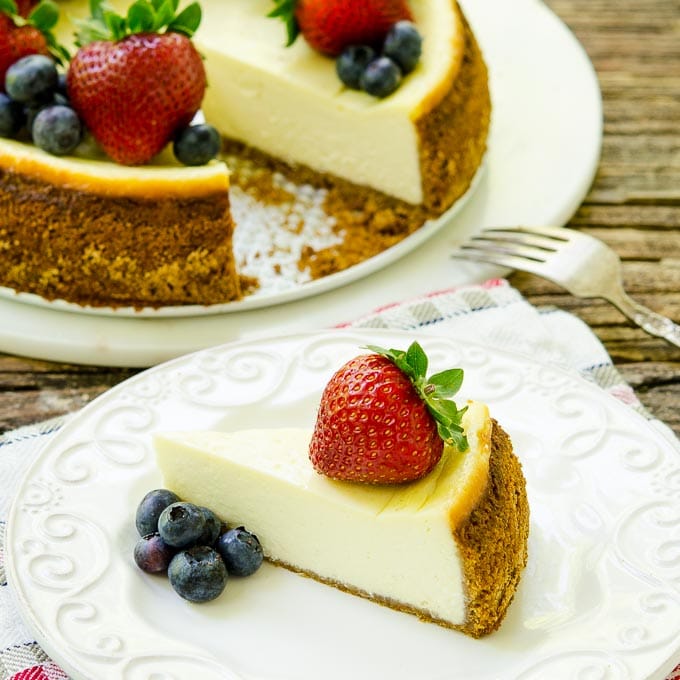 How is Sour Cream Cheesecake? Oh, it’s super creamy and silky smooth. You know what makes it so creamy? It’s the sour cream. There is 24 ounces, yes, 3 cups, of it in the mix. I even called my mom to check if it wasn’t a mistake on the recipe. It seemed like too much. She confirmed it is the correct amount. Serve it plain like my mom prefers, with fruit, or your favorite topping.

What is your mom’s favorite food? Sunday Supper tastemakers are sharing recipes for their mom’s favorite. Scroll down to see the list. Also look at a few more of my mom’s favorites; Sauerbraten, Spaetzle, German Potato Salad, and Chocolate Pecan Torte. 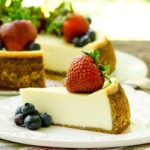 Time stated does not include time for cooling and chilling cheesecake.

Mother’s Day is coming soon. It’s a time to celebrate special women in our lives. One way is to make something they really enjoy. Perhaps it could be one of these mom’s favorite recipes:

Salads, Side Dishes, and Sauces:

Hi there. If I do not want to add the pecans, do I have to reduce the amount of butter? Thank you.

I'd keep the butter the same and swap in more graham cracker crumbs in an equivalent amount to the pecans.

This was also my Mother's Cheesecake recipe. I don't like any other cheesecake. It took me a few tries but I have it down now. People love it! No other cheesecake is this moist. Thanks for sharing.

I found this recipe 30 years ago in a magazine, it was called Bavarian Cheesecake (it's not Bavarian), and lost it. The only difference was it called for 2 cups of sour cream, not 3. It was the best cheesecake I ever made, or ever had. So glad to find this.

Kudos to you for remaking and giving the tips. I would have covered it with whipped cream and called it a day LOL

Stunning, you've captured the silkiness of the cheesecake. Thanks for sharing both versions... there's hope for the rest of us :)