Home » Recipes » Side Dish » Roasted Potatoes with Onion and Bacon 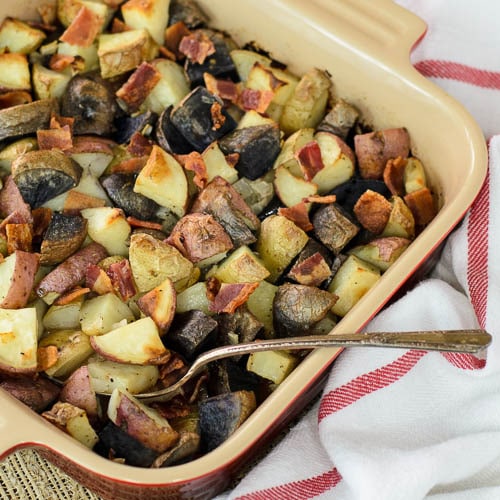 He stood in the kitchen looking into the oven. The meal he prepared was waiting on this final dish. All it needed was the right amount of browning before taking it out of the oven. Too soon and it would not have that wonderful crispness to it. The aroma of a magical secret southern ingredient filled the air. What is that ingredient? It is bacon grease and the key seasoning in roasted potatoes with onion and bacon.

The man in the kitchen was my dad. He was the one who cooked dinner during the week. His meals were simple and yet very special. He poured love and care into his cooking. And he knew how bacon grease could take something from bland to awesome. My parents saved every drop whenever they fried bacon. It was stored in an old percolator coffee pot. Why? I don’t know other than it had the built-in strainer and you could easily pour out the grease. 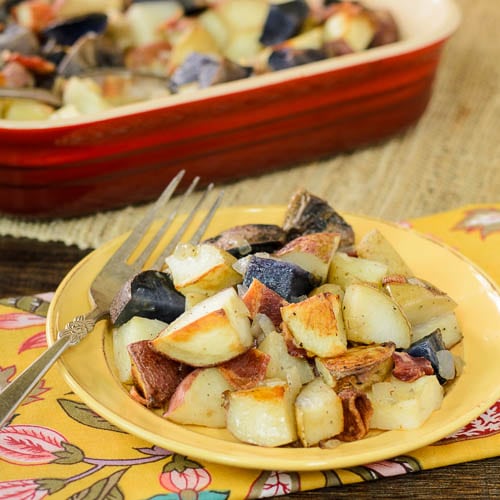 Roasted potatoes with onion and bacon is a simple side dish to make. All you have to do is cut up some potatoes into bite-sized pieces and toss them with chopped onion and bacon grease. Roast it until you see the tops of the potatoes are browned and crispy. Scatter cooked bacon pieces over it and serve. My dad did not top his with bacon pieces. That part is what I added to his recipe because I figured if you are going to cook bacon for the grease you might as well use it too. 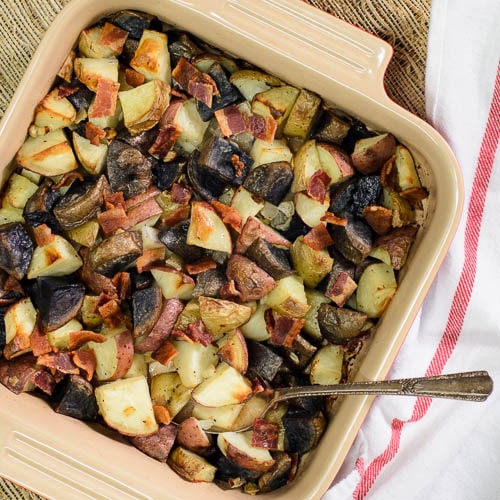 Which potatoes to use for this recipe? My dad used russets. I use whatever potatoes I have on hand. I used Frieda’s Gourmet Potato Medley (Star Spangled Spuds) for this particular one. The mix of Yukon gold, purple, and red potatoes made it colorful too.

Do you save the grease when you cook bacon? It can be quite a flavor boost. Strain it while it is warm and before storing because the meat bits are the first to go rancid. Store it in the refrigerator if you do not use it often. Oh, and take a look at another one of my dad’s recipes, beef stew, that he also used bacon grease as an ingredient.

If you like potatoes and bacon, see also these Lyonnaise Potatoes! 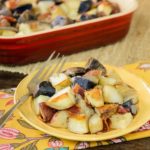 Roasted Potatoes with Onion and Bacon

A recipe for roasted potatoes with onion and bacon. It is a simple side dish to make with potatoes, chopped onion, bacon grease and bacon bits.

Disclosure: I received a bag of Frieda’s Gourmet Potato Medley at no charge. I was under no obligation to post a review. All opinions are my own unless otherwise stated or contained within a guest post.

My mom made the same potato dish but she called them Yankee fries We love them lots.She cooked them in a fry pan. Thanks for the memories. Roberta

Thanks, Roberta! I'll have to try them in a fry pan sometime.

I make potatoes similar to your dads but I do them in my large cast iron skillet and they seem to get even crispier. Also if I don't have bacon or bacon grease I use olive oil.

I'll have to make these in a cast iron skillet. My dad always used a baking pan though.

These are so yummy ,Sure i am gonna make it on my breakfast,because it very easy and fast to make in such a fast life!!!

Quick and easy for sure. Thanks.

Nothing could be wrong with a potato dish like this . . . perfect timing for St. Patrick's Day!

I hadn't even thought of a connection to St. Patrick's Day. What a happy coincidence.

Mmmm, bacon & potatoes! Sounds amazing! My dad didn't cook often, but he also put great care into in when he did.

Food cooked by dads and made with love is the best!