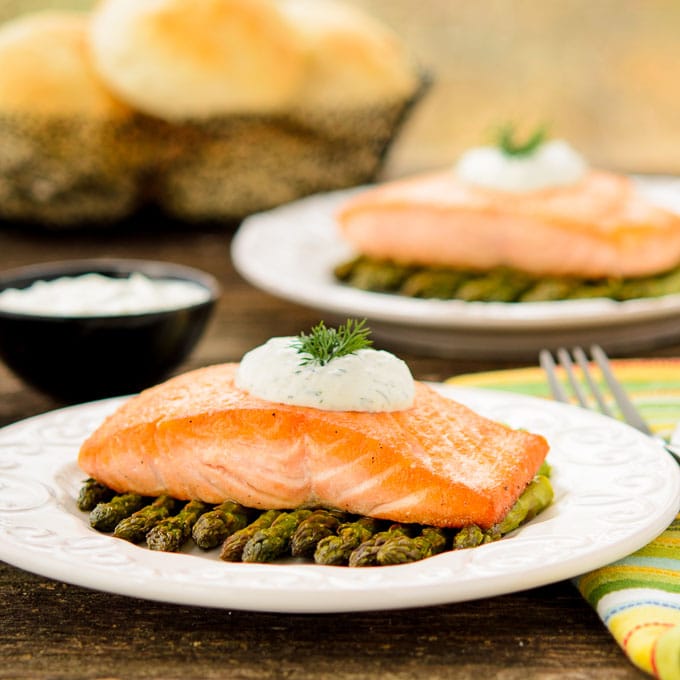 The holiday season seems to have an extra added rush factor. All the usual to-do’s get compounded with decorating, baking, entertaining, shopping, and wrapping. I’m one of those people who really go all out with the decorating part. It took days to get my five, yes five, trees decorated along with putting up wreaths and other holiday décor. I needed something quick and easy to make after a day of ornament hanging. I went in the kitchen and about 30 minutes later I had pan-seared salmon with asparagus ready and on the table.

Sauce is a kicker to so many things. It bumps up, enhances, or adds flavor to simply seasoned meat, seafood, or vegetables. The homemade dill sauce for this recipe does that beautifully. It takes minutes to make and truly compliments salmon. I suggest making it a day in advance or perhaps in the morning. The flavors come together nicely after chilling for hours. 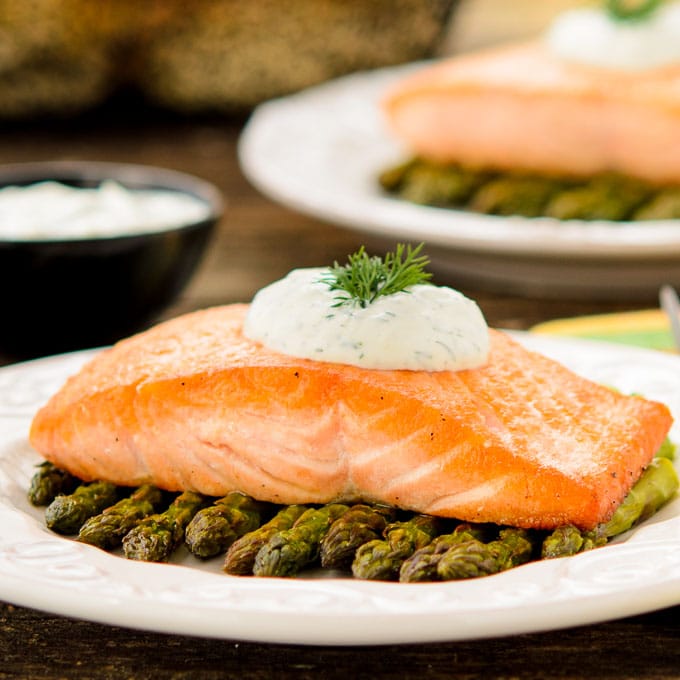 Roasting vegetables brings in another level of flavor. It’s one of my favorite ways of preparing them along with grilling. Asparagus roasts fairly quickly. Watch it and take it out of the oven as soon as you see it lightly browned. The time will depend on the thickness of the spears. While it is roasting you can be searing the salmon. Then all that is left is plating. Put the pan-seared salmon over roasted asparagus and then top it with a dollop of dill sauce. A clipping of dill fronds makes a pretty garnish too.

What else can go with pan-seared salmon with asparagus? I suggest rice (instant or quick-cooking for quick preparation) or bread. I served mine with Buttermilk Rolls. I had extra pre-baked rolls in the freezer so it was easy to quickly re-heat them in the oven. What about the rest of the week? Below are links to more Weekday Supper recipes that are great for homemade meals to make on busy days. 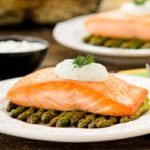 This pan-seared salmon with roasted asparagus is served with a homemade dill sauce. It is an elegant meal for any night of the week.

Are you looking for quick and easy meal recipes? Take a look at these featured this week for a fabulous Weekday Supper lineup: