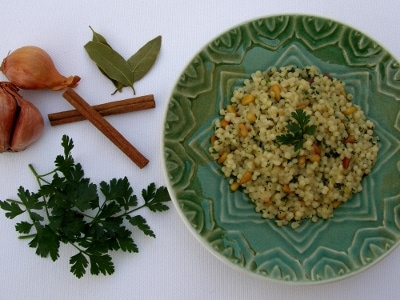 Springtime! I get so excited just thinking about it. Watching the landscape wake up after a winter’s sleep is very captivating to me. I find myself looking out windows and going outside more often. I want to see every single plant and flower as they show new spring growth. The itch to go to plant nurseries is a big one. I have to force myself to wait until it is safe to plant after the last frost. Until then, the herbs that made it through winter help get me through. One of them is parsley: 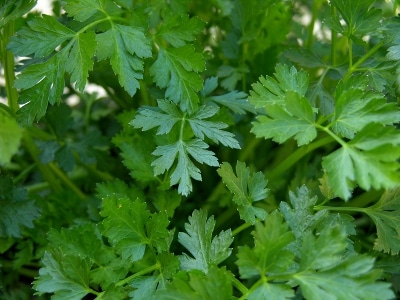 Today’s #SundaySupper event is celebrating spring. Parsley is a good herb to kick off the season. The freshness and color it adds to a dish is outstanding. Plus it has many health benefits. I use it in a number of recipes including tapenade, shrimp arnean, fresh herb vinaigrette, and the one I am featuring in this post; Israeli couscous with pine nuts and parsley.

This side dish goes wonderfully with grilled meats. Grilling is another thing that gets into high gear starting in spring. I do grill on nice days in the winter but not nearly as often as the rest of the year. I love the flavor from grilling and always have. I still remember steak night when I was little and my dad would cook the steaks and toast the bread on the grill. Those were really special dinners. 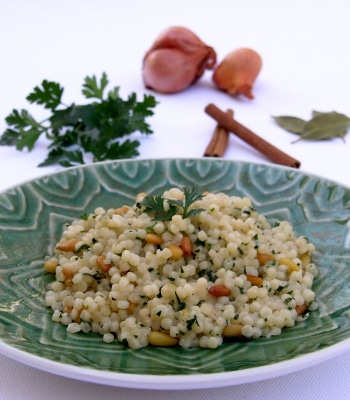 Couscous is not something I had while growing up. I never even heard of it until several years ago. The funny thing is that I had it at a restaurant and it was listed on the menu as “special rice”. I guess someone forgot the name of it. But rice? Anyway, no matter what it was called, it was delicious and I had to make some for myself. The next time I went back I asked the chef about his recipe and how he got the nutty flavor to it. He said to substitute light coconut milk for about half of the cooking liquid. I searched for Israeli couscous recipes and found this one on Epicurious. I adapted it to have the same subtle nutty flavor. It is not a strong coconut flavor like you would think. Just a little extra nuttiness in addition to the pine nuts.

Every Sunday Supper deserves a good side dish. This one is light and fresh and feels like spring. So kick off the season by cooking up a yummy batch of Israeli couscous and dream about the warm beautiful days to come. What food do you crave in springtime? Comment and share your favorites of the season. Let’s see the flavors of spring… 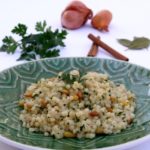 Love the combination of cinnamon, parsley and coconut. Can't wait to try this recipe once my italian parsley is full grown and ready to harvest!

Just checking in from FoodBuzz. I love couscous! This sounds great - can't wait to try it.

Thanks Pam! Glad you stopped in to check out my blog. Come back soon!

yum, this is sooo my type of couscous - i make dishes like this a lot to accompany grilled chicken, but this has a slightly different twist in ingredients - i'll have to give your recipe a try!

Thanks Amy! I am always looking for more couscous recipes. I love it, especially the Israeli/pearl type.

I can not wait to try this fabulous Recipe!

Thanks Isabel! It makes a lot so it would be great for your big family.