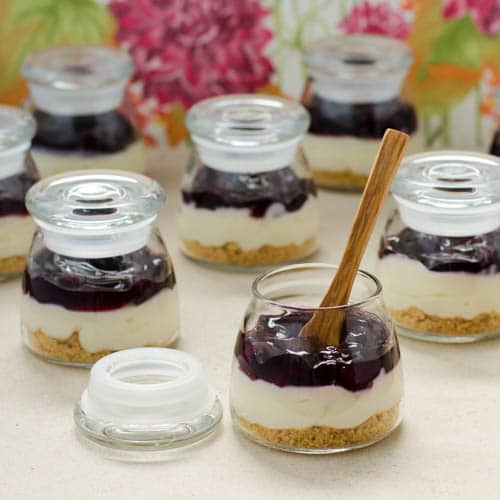 The restaurant looked promising online. We arrived to find it overflowing with people. The wait was well over an hour. We headed to the bar after we put our name on the list. Wine was ordered and someone mentioned the tables around the bar were first come first serve. Right then the people at the table next to where we were standing got up. We filled those seats faster than the speed of sound (or it seemed that way). The dinner exceeded every expectation. We decided to have dessert to end the meal. The waiter brought a rack of mini desserts in small glasses. It’s those little bites that inspired my mini blueberry cream cheese pies.

Notice the pies are in jars. It’s because the theme for this week’s Sunday Supper are recipes inspired by the Desserts in Jars cookbook

by Shaina Olmanson. It’s easy to be inspired by the book. Shaina gives tips and suggestions for utilizing different kinds of jars for desserts. First I had to figure out what jars to use. Then I had the idea of spice jars

. Next was deciding on a recipe. I was in the mood for blueberries so I adapted the one for my cherry cream cheese pie.

The fun was getting the pies into the jars. I spooned in the crust and shook the jars around to get the crust even. I did not bother with pressing down the crust. I used a piping bag with a big round tip for the cream cheese filling. A thin spoon worked for adding the blueberry topping. They are pretty little single-serving pies with a crumbly crust, creamy filling, and fruity topping. 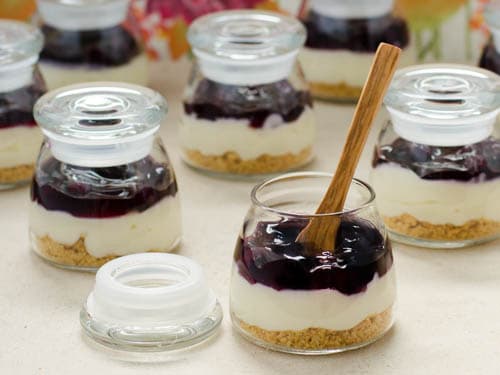 Would you like to win a copy of the cookbook? All you have to do is comment on what dessert you would want in a jar. Entries will be assigned a number and the winner selected using Random.org. The winner will be notified by email. If the winner does not respond in 48 hours an alternate winner will be selected. Contest ends on Friday, June 28, 2013 at 11:59pm Eastern Time. Contest is only for United States citizens, with a US shipping address, and over the age of 18.

You can purchase the cookbook. All you have to do is click on the photo of the cookbook to go to Amazon (affiliate link):

But wait! More good news:  Join us during the #SundaySupper twitter chat on Sunday, June 23, 2013 and you could win one ticket to the Food and Wine Conference and a two night stay during the conference at the beautiful Rosen Shingle Creek. Everyone that joins the chat will be entered to win.

What exciting giveaways! There are more Desserts in Jars inspired recipes below. Scroll down and check them out… 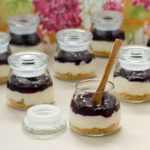 Ready for more Desserts in Jars? Take a look at these recipes from the Sunday Supper bloggers:

Disclosures: This post contains affiliate links. I received a copy of Desserts in Jars at no charge for a previous event (see Monster Cookie Mix) and was under no obligation to give a positive review. All opinions are my own unless otherwise stated or within a guest post.

I would love to see Tiramisu. One of my all time favorite desserts.

These are seriously gorgeous woman. I would eat a boatload of these. I am still scratching my head how I missed the jar theme. Gotta love busy summers and Alberta floods. I wish I had jumped on board this one.

I wondered how you missed the jar theme too. You do amaze me with your layering and piping abilities.

I absolutely love things in jars. And cream cheese with blueberries...jar dessert heaven!! I love those little spice jars, too.

My jar collection keeps growing. I see many things in jars in my future.