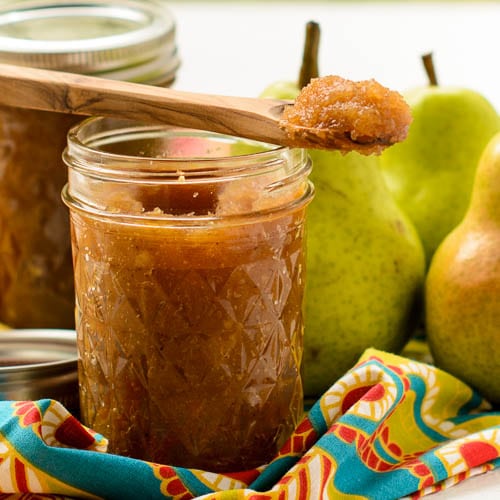 September is usually when we go on vacation. The weather is generally pleasant and places are not as crowded as during summer. For many years we would go to Orlando and enjoyed visiting the theme parks without waiting in long lines. Then we started going to California wine country. Being there during or close to harvest time is such fun. It was in California where I had a most fabulous pear and stilton salad and from then on I always associate fall and September with pears. As soon as they appeared in my local market this year, I bought a few pounds of them and made Honey Ginger Pear Butter.

Pears were not always on my radar. In fact, I would not eat them when I was a kid. The gritty texture did not work for me. Plus I blame being subjected to canned pears at cafeterias. Now I know the texture of pears can vary depending on how ripe it is or the variety. Some barely have any grittiness to them. Bosc and Anjou are my preference for eating raw. Bartlett is what I use to make both pear sauce and pear butter. 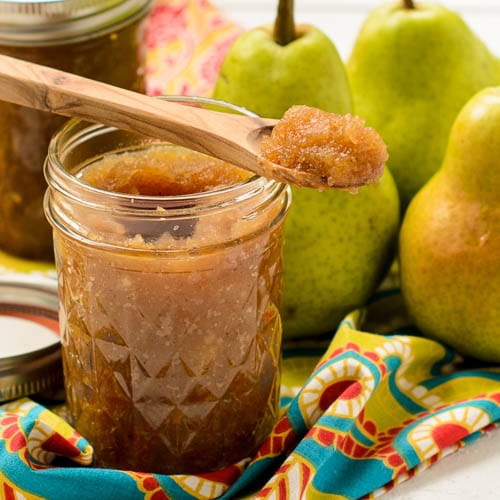 Honey Ginger Pear Butter smells incredible when it is cooking. It fills your home with the most delightful aroma as it simmers for hours. I found myself happily going to the kitchen to stir it often and lean over the pot to take in a deep breath. Be sure to watch over it more toward the end of the cooking process. You don’t want it to get too dry or scorch. I recommend using a non-stick pan too.

About the texture of the pear butter. The finer you process or puree the pears in the food processor will make it smoother. I wanted mine not completely smooth. It could be chunky, the choice is up to you. Once Honey Ginger Pear Butter is done you can either store it in the refrigerator which will last a few months or can it to last longer. Use it as a spread or substitute for applesauce in recipes. Just keep in mind it has honey, ginger, lemon, cinnamon, cardamom and vanilla in it when using it in place of plain applesauce.

Which type of pear is your favorite? I’m still deciding on which one is at the top of my list. I’m also thinking it is soon time to bake another Pear Almond Cake. Plus there may be a fizzy beverage in the works too. Stay tuned…

i JUST PICKED ABOUT 6 PAPER GROCERY BAGS WORTH OF PEARS AND HAVE BEEN MAKING DEHYDRATED PEARS AND EXPERIMENTING USING MY CROCK POT AND ADDING HONEY AND GINGER TO UNPEELED PEARS. TO MAKE PEAR SAUCE. I WANT TO MAKE IT NEXT INTO 'PEAR BUTTER' AND WANT TO TRY USING MOST OF YOUR RECIPE IDEAS BUT TO SEE IF I CAN RETAIN EVEN MORE OF THE SUPERB FLAVOR BY USING A CROCK POT AT A LOW TEMP RATHER THAN A SIMMER... SO FAR I ADDED LIME JUICE TO BOTH THE SLICED PEARS I AM DEHYDRATING AS WELL AS TO THE CROCK POT SLICED PEARS. I LIKE USING THE PEELS TOO ( AS I PRESUME THIS MAY HAVE ADDED NUTRITION OR AT LEAST FIBER AND i AM A BACK TO NATURE "HIPPIE IN MY 50S!)"

MY GOAL IS TO TURN THE PEAR SAUCE INTO PEAR BUTTER. CURRENTLY THE PEAR SAUCE TASTE IS MARVELOUS FROM SLOW COOKING IT ON LOW IN THE CROCK POT. HAVE YOU TRIED THIS RECIPE BUT IN A CROCK POT? I HEARD THAT ADDING SPICES INTO A CROCK POT MAKES THEM BITTER BECAUSE OF THE LONG COOKING TIME. I HAVEN'T YET ADDED SPICES DO YOU HAVE ANY EXPERIENCE WITH THIS? I USED FRESH GINGER THAT I GRATED THEN FROZE AND PUTTING THIS ALONG WITH THE LIME AND HONEY ADDED A VERY NICE, SOMEWHAT TANGY, SWEET, COMPLEX AND LOVELY FLAVOR.

I have not tried making either pear sauce or pear butter in a slow cooker. I want to try it one day. I'm not sure about the spices becoming bitter during a long slow cook. I also want to try making it in a pressure cooker too.

Thank you for this recipe! I made it today and it's excellent! I didn't have fresh ginger so I used ginger powder and then vanilla extract for the vanilla beans, but everything else was the same. The flavor was delicious!

Few combos can top pear plus ginger - this sounds divine!

Thanks! Obviously I really enjoy the combo. I've even bought candles that were scented that way.

I love fresh pears that are perfectly ripe. I even liked those canned pears we were served in school lunch programs. Your pear butter looks like something I need on my biscuits!

It was so nice to meet you on the Idaho Potato Tour...looking forward to reading your posts and keeping in touch!

Thanks so much Mimi and I'm looking forward to reading your posts and keeping up with your adventures too.

Hmm, perhaps it's time for me to give pears another try. Their grittiness always put me off as well but perhaps I was just eating the wrong ones. Thanks for the nudge, Renee.

You are welcome Stacy and I hope you do discover enjoyment of pears.