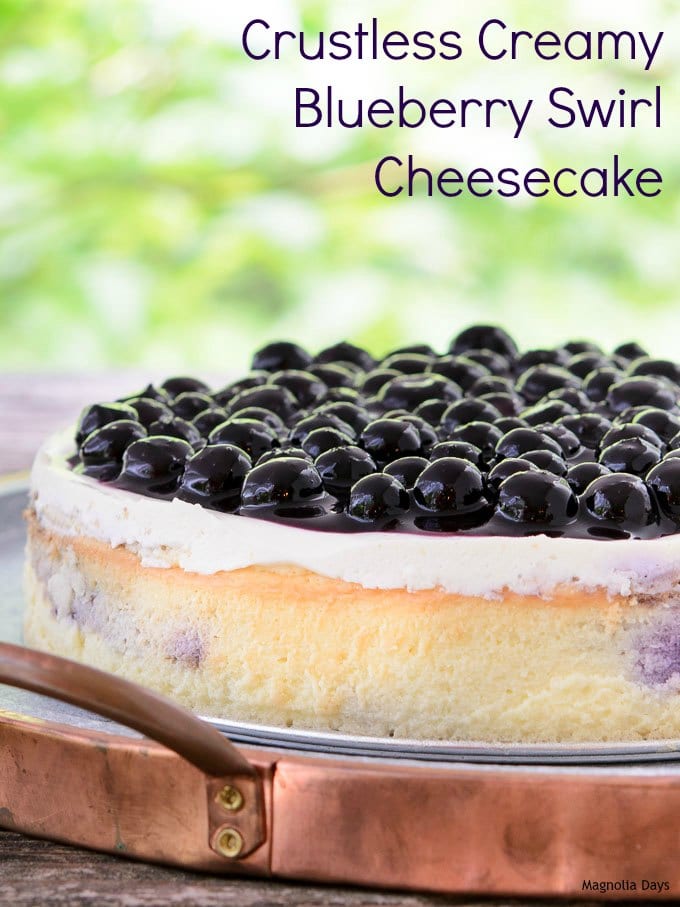 Everyone has a story to tell. It could be a special moment or the recollection of childhood events. The stories can capture and preserve a time long ago. Such is with this story from my mom. To honor her for Mother’s Day is why I am sharing it with the world. This post is long and if you want the recipe for Crustless Creamy Blueberry Swirl Cheesecake then scroll down to find it. My mom told her story years ago when a group asked her to give a speech on her memories of World War II. This is the speech she gave:

My name is Inge and I was born in 1934 in Breslau, Silesia which is east of Berlin and after the war the Russians gave this part of Germany to Poland. At the end of the war I was only 11 years old but I have some vivid memories of the life during those years.

Hitler prepared and controlled the German people in the way of what they hoped for, what they feared, and what they endured during their experiences in the war. Hitler convinced the German people that they must have more land for their ever-increasing population and that life would be wonderful for all of them when Germany conquered the world. We were told, that if Germany did not win the war, we should just “turn on the gas stove” because to be conquered would be unbearably horrible. My family had planned to do so.

My first bad memories of the war are of going underground when the air raid sirens warned of bombers. My father was a civilian in charge of the officer’s kitchen in occupied Poland and I was living with my mother, grandmother, nine-year old brother, and five year old sister in Breslau, Silesia on the Oder River. Breslau was not one of the heavily bombed cities but no place in Germany was safe from Allied bombers.

When the sirens sounded, my family went into the cellar and waited fearfully. I remember that my 5-year old sister was unable to comprehend the danger, and how during one of the air raids she begged for a sandwich. At other times, life seemed normal to us. Because my father’s work with the officer’s food supply, my family had enough to eat in spite of rationing. My father retained his civilian status until the latter part of the war when he was compelled to go into uniform.

Our family stayed in Breslau until January 1945 when we heard that the Russians were coming, then we left and went west to a small village and stayed with a friend of the family. After we had been there for three weeks, we had to move again for the Russians were getting nearer. We tried walking and pulling our belongings on a little wagon. The road was crowded with miles of people, mostly women and children. A car that was trying to get through the masses brushed almost my arm. My mother told me, that she recognized Göring (Commander of the German Luftwaffe) inside the car. Finally our wagon lost a wheel and my mother said we would have to go by train. At that point my mother decided we would go to Dresden. We were unable to get a train out right away and so fortunately missed being there when that city was bombed and about 200000 people were killed. After we heard of the bombing in Dresden, my mother decided we must cross Czechoslovakia and go into Austria.

My family safely crossed Czechoslovakia and arrived in Austria, although at one point we had to exit the train and lie face down while bombers were shooting down at the train. For a time we slept in classrooms on straw beds. Then we heard that our father was in Pilsen, Czechoslovakia at the Air Force Base and my mother was able to phone him. He mailed us some papers that enabled us to leave Austria and go to him. There we stayed in a nice apartment building for officers’ wives located outside the camp. At that time the Americans were bombing Pilsen, and we could hear the whining of the bombs and the explosions, but I was told, not to fear those that we heard, that if we heard them we were safe.

We had been in the apartment for about five weeks when we heard shooting. I remember the date was May 7th 1945, we hurriedly packed our clothes and went to the camp to be with our father. The Americans were getting closer, the Czechs were “getting real wild against all Germans” I understand that this was in retaliation for the way German soldiers had treated the Czechoslovakians during their occupation of that country. My mother made plans to leave with another family, but my father insisted that we had enough time to stay the night and leave the next day.

We awoke in the morning to the sound of tanks rolling in. The Americans had arrived. All soldiers were ordered to report to a certain hangar and give themselves up, and the women and children were going to leave camp and try to cross the border back into Germany. When my father told us goodbye, he said he hoped he would see us again someday. He told mother, after the war we all should try to go to Reutte in Tirol and meet there with him.

When we reached the border, we found Czechs instead of the German guards that we expected to find there. When we told the Czechs that we wanted to go back to Germany, the new border guards said they would escort us, but instead they took us to a prison in Pilsen. The prison was built like a star with a large open area in the middle with four wings of cells. We had to leave our suitcases in the courtyard and when we went inside I saw a blue light and thought they were going to burn us, cremate us. They were searching us for knives, scissors, or any other sharp objects before being herded into the cells, about eighteen persons to a cell. We were in the prison in Pilsen, Czechoslovakia for three weeks. Each day we were given a small piece of bread, some sauerkraut, and tiny potatoes to eat. The only variation was some kind of stew we were given one day when the Americans came for inspection. Our stomachs were soured from the sauerkraut before we were released. It was my good fortune that I was so young because older girls were taken out to the camp for the pleasure of the American soldiers. The worst part was that at night the Czechs brought in members of the Gestapo, made them kneel in the open central area, and beat them to death while we had to hear their screams.

When we the prisoners were released we had to walk through the town, and Czechs lined both sides of the streets and spat at us. Some elderly women fell dead of heat stroke before we reached the outskirts of the city where we were loaded onto American trucks and taken to Bavaria in Southern Germany.

Although the war was over and we were back in Germany, we still had a lot of problems. We were homeless, had almost no possessions, and did not know where my father was or even if he was still alive. With all those troubles, my Mother forgot that we were supposed to go to Tirol and check if father was there, he went there but we did not. We loaded our few belongings on a horse-drawn wagon and wandered from village to village, but no one would take us in, they all said that they had no empty rooms, so we had to sleep in hay barns most of the time. “We were Germans and they were Germans, but nobody had room, nobody wanted us, and there were so many coming out from Czechoslovakia”

My mother heard there were some trucks heading north for Jena, Thuringen where she believed that her sister moved to from Breslau, Silesia. She arranged for our family to ride in one of them. Six weeks after we arrived there, this part of Germany was given to the Russians.

We stayed in Jena, Thuringen for a year. My mother worked for the Russians in a kitchen to support our family. I had only two dresses; I wore one for 2 or 3 days and washed the other. My mother gave me all the money she made and at age 11 I managed it, so we had enough of the rationed food to eat for a month.

Finally we heard that our father was alive and living in Regensburg and we were able to contact him through the police. He had to get papers proving that he had lumber to build us a house before we could go out of the Russian zone and join him.

We were on the last train to leave Jena, Thuringen before the Iron Curtain fell. After that, no matter what, you could not get out of the Russian zone.

My family was fortunate. All the members of our immediate family, including my grandmother, survived the war. We had lost our business, and the money my parents had saved had to be exchanged at the rate of ten marks for one in 1947, but we were all reunited and I lived in the house my father built at the end of the war in Regensburg until I came to America in 1953 to get married. 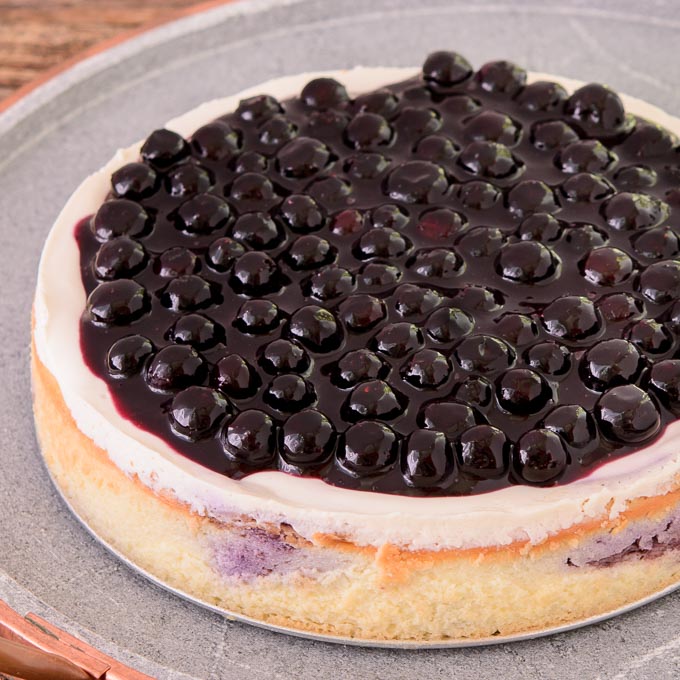 Crustless Creamy Blueberry Swirl Cheesecake was made for my mom. Cheesecake is one of her favorite desserts. She eats blueberries every day. I’m quite sure she will enjoy the rich, dense cheesecake with swirls of blueberry throughout. It is extra creamy with a top layer of lightly sweetened sour cream plus fresh blueberries and a homemade sauce. 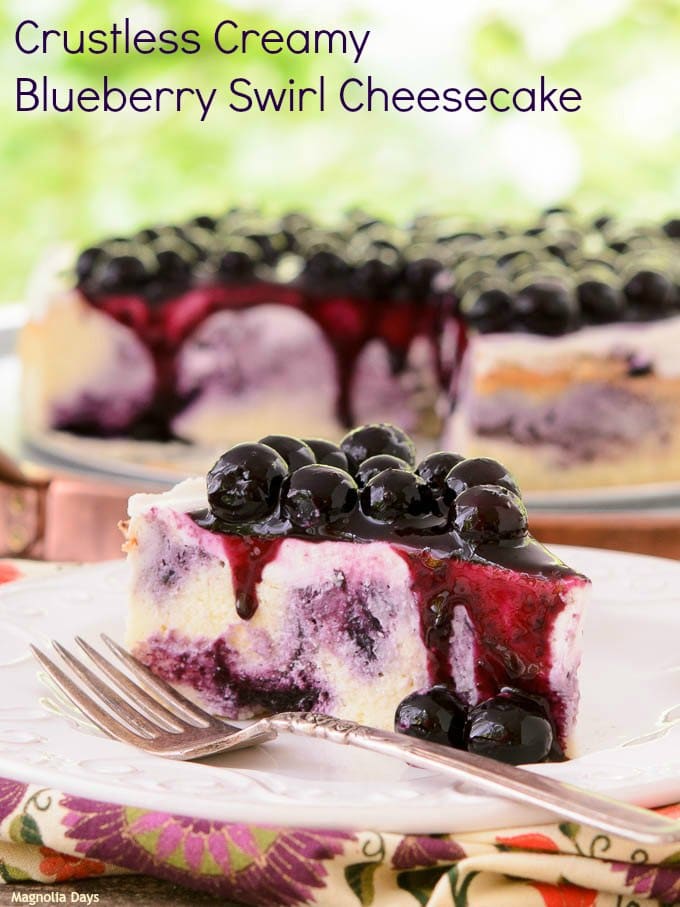 How do you treat the moms in your family? I have an annual feast and make family favorites including German Potato Salad. Scroll down to find a list of more recipes by Sunday Supper tastemakers. Thanks to Camilla of Culinary Adventures with Camilla for hosting this virtual Mother’s Day celebration. 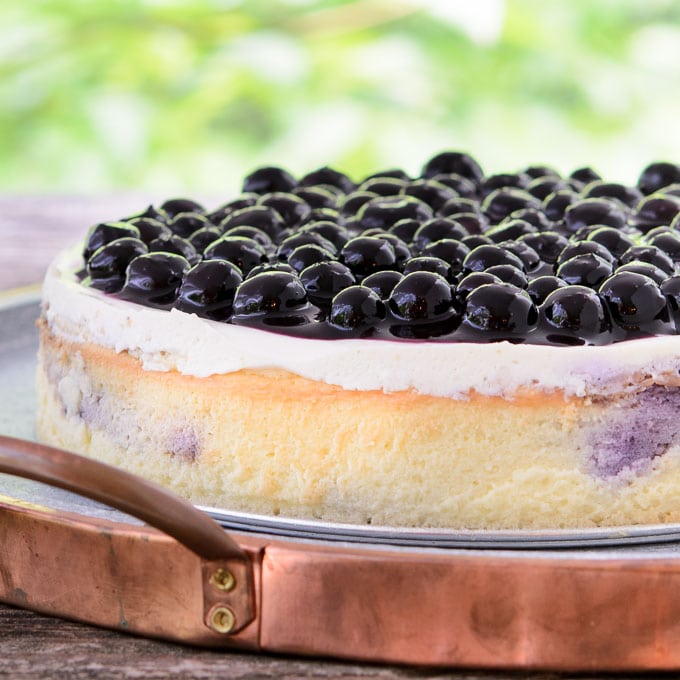 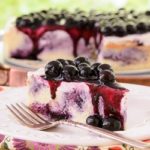 This blueberry swirl cheesecake is crustless, has blueberry filling swirled throughout, and is topped with a creamy layer and fresh blueberries.

Recipe adapted from one in the Southern Living 1987 Annual Recipes cookbook (no longer in print).

Moms certainly enjoy someone cooking for them. Take a look at these Mother’s Day recipes by Sunday Supper tastemakers: