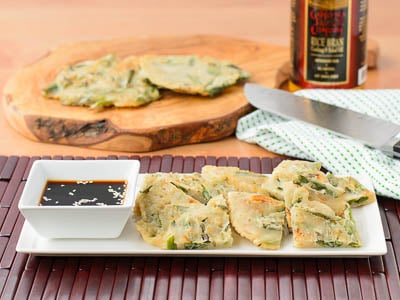 Every had a recipe you have so much to say about? It is my situation with these Crab Scallion Pancakes. The story goes back for months. Forgive me if I am a little wordy in this post. There are a lot of parts to go with this simple recipe. I suppose the best place to start is from the beginning.

First there is my history with scallions. I could not stand them for most of my life. I would not eat them for anything. Then my tastes changed right about the time I was approaching 40. I started liking things I never liked before. Scallions became okay and then more okay and now I think I could eat one all by itself. Pile on the scallions please!

Then came a Sunday Supper event. It was back in September and featured recipes with 5 or less ingredients. Amy from Kimchi Mom shared her recipe for Pa Jun or Korean Scallion Pancakes. I had never seen or tasted a savory pancake before. Where have I been? I certainly have been missing out. Her post went into the back of my mind where it sat for a while, not forgotten, just on hold.

A bottle of rice bran oil arrived at my door. The nice folks at California Rice Oil Company had sent it to me to try. It was another oil I had not cooked with or used before. It was also during the holiday season. I was baking up a storm, entertaining, decorating  and didn’t have time to play with a new product. So it also sat for a while, not forgotten, just on hold.

A few weeks ago I discovered a new food store. My friend Terry asked me to go with her to check it out. The store has a big focus on Asian cuisine. It also has incredible fresh produce and seafood. We were browsing through and being amazed at what all was there. I saw this lady cooking scallion pancakes. She had samples so of course I had to give it a try. They were mixed seafood scallion pancakes and off the charts good. That is when I knew I had to make them. 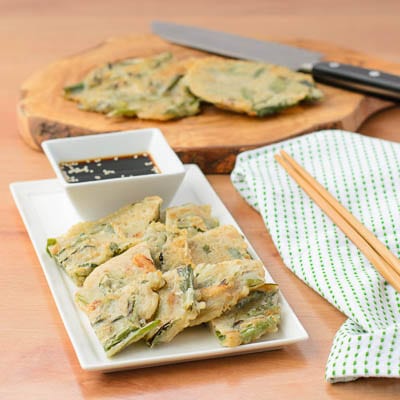 I had a discussion about oils with friends. One is quite a foodie who cooks and eats about anything. The other has a very strict diet and does not like spice or flavor. He also only eats egg whites. They were talking about him cooking scrambled egg whites. He would take a teaspoon of oil and wipe it on the stainless steel pan and then cook the egg whites. They said if he used olive oil they would have to soak the pan for hours to get them off. However, when he used rice bran oil the egg whites did not stick. So I thought if Mr. Strict Diet uses rice bran oil then I need to give it a try and soon.

Which brings me to finally cooking crab scallion pancakes. It was an adventure. I went by Amy’s recipe and discovered I cannot flip one big pancake. I tried twice and failed miserably. I decided to make them smaller like regular pancakes. I can flip those with no problem. I added the scallions and crab to the batter and then ladled the batter into the pan. It worked like a charm. I used the rice bran oil and I’m glad I did. I felt it was the right oil to cook Asian-style pancakes. The flavor of these pancakes is exactly what I wanted. The crab and scallions pair up nicely. The dipping sauce makes them even better.

I know I will use the rice bran oil often. I like that is has a high smoke point and I think it would work well for pan searing and frying. It is very mild and would not interfere with the flavors of food. You can check California Rice Oil Company’s store locator to find out where to get it in your area.

Have you ever had a long story for a small thing? I hope you have enjoyed all the details for my crab scallion pancakes. I may have left a few out too. Who knows, they might show up in a future post. Stay tuned…

A recipe for Korean-style scallion pancakes made with the addition of crab. These are savory pancakes and are served with a dipping sauce or soy sauce.
Course Breakfast
Cuisine Chinese
Prep Time 10 minutes
Cook Time 15 minutes
Total Time 25 minutes
Author Renee

For the dipping sauce:

For the dipping sauce:

A recipe for Korean-style scallion pancakes made with the addition of crab. These are savory pancakes and are served with a dipping sauce or soy sauce.

Dipping sauce recipe adapted from one on About.com website.

Disclosure: I received one bottle of California Rice Oil Company Rice Bran Oil at no charge. I was under no obligation to give a positive review. All opinions are my own unless otherwise stated or contained within a guest post.

I feel like my life is one big story for one small thing, so clearly I LOVED the way you told this story! It's funny how our lives piece themselves together bit by bit and we wind up we things we might never have imagined a few months or years before. I've never made an Asian style pancake, but my best friend happens to love crab and any member of the onion/scallion gang, so these might just be what I make for her the next time she visits!

Thanks Kelly! So true how our lives piece themselves together. It's a good thing when it leads to wonderful discoveries.

Yum! I like to do kimchi pancakes, and fried egg pancakes with fish oil, onion, and garlic. What Asian store did you go to? We have TONS right here by us. The produce is always super cheap and local a lot of the time!

I'll have to try kimchi pancakes. I have not had them before. The Asian store is the Super H Mart.

Yummy!!! They look so delicious.

Heading out to look for rice bran oil ...

I hope you find it. I think you will like it a lot.

Very much reminds me of Japanese okonomiyaki pancakes. And your rendition of Amy's recipe looks fabulous! Good to know about rice bran oil, too.

Thanks Kim! I'll have to look up a recipe for the Japanese-style pancakes and try them too.