I had a craving for cinnamon rolls. Good, old-fashioned cinnamon rolls with vanilla icing. It had been a while since I made bread so I knew it was time. I have been baking bread for many years. I started long ago using the hand kneading method. It all changed when I got my KitchenAid stand mixer. Once I used my mixer’s dough hook, most all the hand kneading work was over. I still hand knead a little to check the texture of the dough.

The recipe search was quick. I pulled out The Red Star Centennial Bread Sampler cookbook from my shelf. I have had this cookbook since 1981 and it is filled with delicious recipes of so many breads. I have made several of the breads and they all came out great. Because I no longer hand knead, I adapted the recipe using my experience with the mixer. I also wanted more cinnamon/sugar filling and a vanilla icing. The original recipe does not have icing.

Baking bread is a great experience. It does take some concentration and focus. The end result is amazing. I was so captivated and involved at the beginning of the process of making these rolls I forgot to take photos. The photos start after the dough has completed the first rise.

After the first dough rise, the dough is punched down and rolled out. Melted butter and a cinnamon/sugar mixture are spread out on the dough. Look at all the yummy cinnamon: 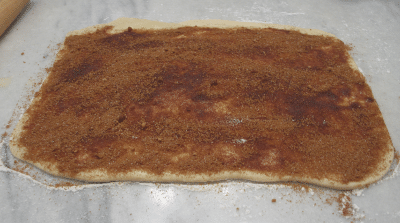 Roll up the dough, pinch to seal the edge, make 1 inch slices, and put in a greased rectangle cake pan: 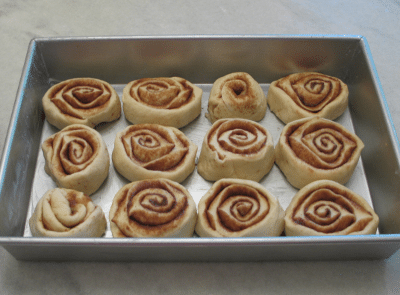 After the second rise, they are baked. The house smells really great at this point. Especially the rush of cinnamon as you open the oven to get them out when they are done. They are some delicious looking browned beauties: 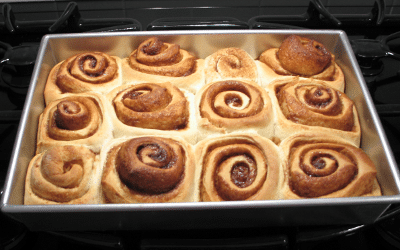 Pour the vanilla icing over them while they are hot. Must have icing on cinnamon rolls. At least I know I do. 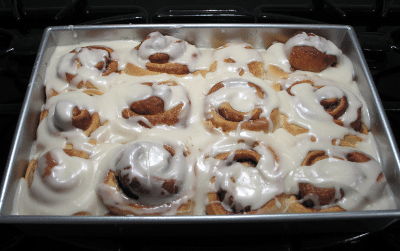 Remove the rolls from the pan. Enjoy them while warm. Keep any leftovers covered with plastic wrap or in a sealed container. They can be re-heated for about 20-30 seconds in the microwave. 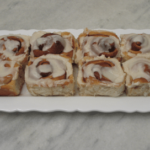 To shape and bake the rolls:

A recipe for old-fashioned cinnamon rolls with vanilla icing. The rolls are light, fluffy, and filled with brown sugar and cinnamon.

I'm craving these now! I prefer icing too, so it's nice to see that you added that to the recipe :) I'm happy you're enjoying our Centennial cook book. It's in high demand! We get requests for it all the time, but unfortunately it is no longer in print..

Oh I love your cookbook. Perhaps you should look into re-printing it. I'm sure it would sell.

yum! i made cinnamon rolls for the first time last christmas + they turned out just delicious. and you're right - the house smells just fantastic! your vresion looks wonderful. =)

Thanks Amy. I love the smell of cinnamon and bread baking. This is the best of both worlds.