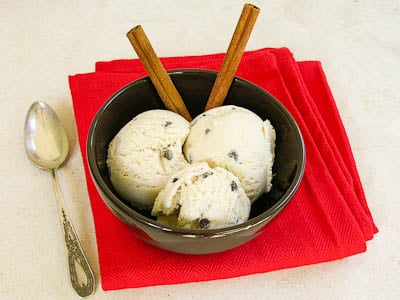 Time for some ice cream! I had to get in another batch before summer is over. I cannot believe how quickly summer went by. It seems like yesterday when I was preparing for the season in the garden. Soon the hot days will transition to cooler ones when fall begins. Until then, the days are still hot and it is nice to cool down with some homemade ice cream.

Cinnamon chocolate chip is my all-time favorite flavor. My love of the combination of cinnamon and chocolate began about 30 years ago. Do you remember the old Del Taco restaurants? Well, more like fast food places. They were a competitor to Taco Bell at the time. I liked Del Taco better than Taco Bell and was sad to see it go. I think some of the franchises carried on but they are nothing like what they were back then. Anyway, Del Taco had these incredible cinnamon chocolate milkshakes and that is how I discovered the flavor combo.

Through the years I have made many ice creams and sorbets. A few of the recent ones are vanilla bean, Biscoff, and peach. Ice cream is one of those things that if you have a good base recipe then the possibilities are endless. A good ice cream maker

is essential too. I keep the bowl of mine in the freezer all the time so it will be ready to freeze when I need it.

I use chocolate chips for texture. I like the way they add a bit of a crunch to the ice cream. Plus you can add as much or as little chips as your prefer. You can leave them out if you only want cinnamon (which would be good on apple desserts and such). This is the ice cream that calls my name all day long. I even thought about making a float with iced coffee for breakfast. Ice cream at breakfast? You know I would have to love it if I considered doing that.

What ice cream calls your name all day long? We all have our weaknesses. I am glad I shared this batch with some friends so I would not indulge too much. It is so very tasty. 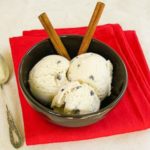 A recipe for homemade cinnamon chocolate chip ice cream - a delicious frozen treat to be enjoyed at any occasion.

i know it's still cold outside but i can't keep the distance from something like that, so creamy and iceeeee :D

Sounds great!! Love this combination, I may have to give it a try but first I will have to get myself an ice cream maker :( ... Visiting from www.craftyspices.com Thanks for the recipe.

Cinnamon and chocolate ice cream?! This sounds amazing - as does the milkshake you mention, too! You're right about summer going too fast but to be honest, I could be doing without the humidity here - bring on the crisp, autumn weather!

It's funny how many of us have never tried cinnamon and chocolate! I never would have thought of the combo beyond hot chocolate. Sounds really yummy!

YUM - i love ice cream and this recipe sounds so good. I will have to put it on my to do list.