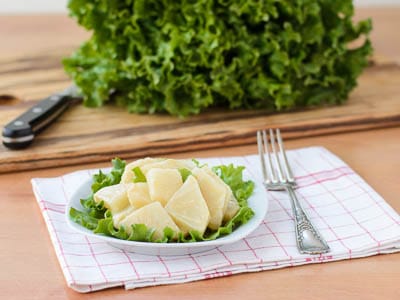 I discovered celeriac in Germany. Have you had it before? It is also called celery root. It is “Sellerie” in German. Interesting because it sounds like celery in English but is not the same thing. It lead to an interesting discussion one day when my mom and I were in Germany this past November. A few days later I had a celeriac salad. It was something I knew I would have to make.

The topic of celery came up because of a recipe. My mom had printed out my post on stuffed celery and took it to show the family. She did it to share my story which included my dad and how special it was when he made it. The discussion lead to the difference of celery and sellerie (celeriac). At that moment in time I had no clue how celeriac looked or tasted. I’m sure if I had seen it in a store I would have passed it right by. It is quite, well, not so pretty: 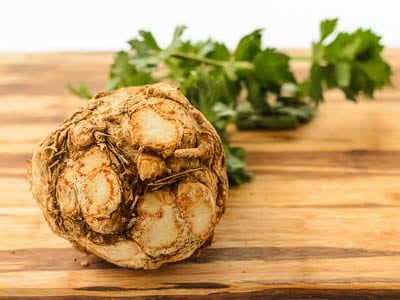 Then I tasted celeriac for the first time. Family friends in Germany invited us for lunch. I was very much looking forward to it because she is an excellent cook. The meal started with this big German-style salad. Leaf lettuce with cucumber salad, beets, and what I thought was potato salad on top. One bite and I knew it wasn’t potato. I asked what it was and my aunt said it was celeriac. It had a nice mild flavor like a combo of celery and parsley. I left Germany with a mission to make it. It took a couple of attempts to get it right. 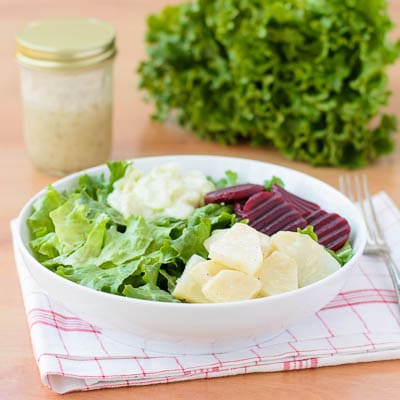 The first time cooking it was a disaster. I thought celeriac was peeled and boiled like potatoes then dressed with a light vinaigrette. I sliced it up and put it in water to boil. The more it cooked the darker and bitter it became. I thought perhaps the dressing would help. I used apple cider vinegar and it made the dark color worse. It looked and tasted awful. Into the garbage disposal it went.

The second time cooking was a success. I had researched different methods. I decided on steaming. I wanted slices to look like potatoes so I steamed halves and then sliced afterwards. Rubbing it with lemon and using lemon juice in the steaming water kept it from turning brown (oxidizing). I used white vinegar and a light oil to make the salad. It worked nicely. Especially because I wanted to make a big salad like I had in Germany. I did not want a conflict of salad dressings.

Have you discovered a new food while traveling? It is one of the best parts as far as I am concerned. Eating the local cuisine is so very inspiring. There are many delights to discover. Go forth and taste! 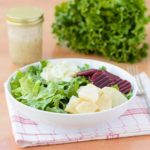 A recipe for celeriac salad (aka celery root salad) made with a simple vinaigrette.

I love celery root - it's great combined with apples and potatoes or pears. My latest "foreign" food discovery was in New Zealand - they put a slice of beet (beetroot) on a hamburger. It's surprisingly good!

Beetroot on a hamburger? Interesting. My husband loves beets and hamburgers. I'll have to try that and see how it is.

Haha that's an australian thing too. I thought it was worldwide until recently. It's usually beetroot that's been in vinegar and it kind of takes the place of the american pickle in the burger. Our burgers very rarely have pickles on them.

My market sells these and I've seen them used raw in salads on shows on the Food Network. Time to experiment! :)

I want to try it raw in salads too. I think it would add a great crunch. First I had to tackle it the way I had it in Germany though.

What a beautiful salad. I am so intrigued... now I will be on the hunt for celeriac.

The backstory on this recipe is fascinating, Renee. I'm wondering about the origins of celeriac as I've only heard it referenced once before for an Indian recipe. Anyway, thank you for paving the way with your research so now we can replicate this lovely veggie blend of celery and parsley =)

Celeriac goes back a long time. It is certainly more popular in Europe. You have me curious about it in an Indian recipe. I'm wanting to cook Indian cuisine more and learn more about it.

I love Sellerie Salad - Growing up in Germany, it was always part of our mixed salad, as at your friends house. I cut my celeriac root into jullienne strips, steam and mix it with homemade vinaigrette - yummy - lecker! Chopped celeriac root, onion and carrots are also very good in homemade gravy for pork or beef roasts!

Thank you so much! It's nice to hear from someone who enjoyed this same type of salad in Germany.