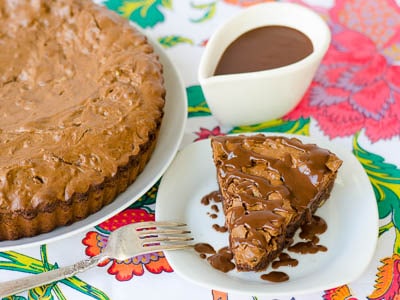 Who is your favorite celebrity chef? Television and cooking shows have certainly given some chefs widespread popularity. Some I could watch anytime and others not so much. I watched The Food Network almost every day after I became a Domestic Goddess. I saw many shows several times over. I learned a lot and was inspired to try new things in the kitchen.

There are a few Food Network chefs that I watched most often. I admit I have not watched any food or cooking shows in a while. Cooking, baking, gardening, and blogging has taken the place of most of my TV watching time. When I did watch it, these were the chefs that stood out to me:

Today’s Sunday Supper is about favorite chefs. Picking a favorite is difficult for me. I like many for different reasons. I decided to share one of Ina Garten’s recipes (slightly adapted). I have made this brownie tart on several occasions. It is rich and very chocolate-y. The sauce makes it even more rich and chocolate-y. Serve it with ice cream or whipped cream if you need to cut the chocolate richness with something. Me? I’ll take all that deep chocolate richness all by itself. Mmmm…

Check out these celebrity chef recipes from the Sunday Supper team:

Join the #SundaySupper conversation on twitter each Sunday. We tweet throughout the day and share recipes from all over the world. Our weekly chat starts at 7:00 pm ET and you do not want to miss out on the fun. Follow the #SundaySupper hashtag and remember to include it in your tweets to join in the chat. Check our our #SundaySupper Pinterest board for more fabulous recipes and food photos. 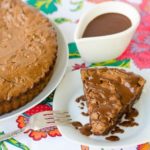 A recipe for a brownie tart served with homemade chocolate sauce. It has a deep chocolate flavor and is loaded with chocolate chips and nuts.

Recipe adapted from one by Ina Garten on The Food Network website.

Yummo! This is chocolate heaven. I'll take a few slices to go ;)

I love anything from Ina and this tart is fabulous! I've made it myself, so I can attest to it!

Thanks so much for stopping by my blog and leaving a sweet comment.

I'm ashamed to admit that in my first year of blogging I haven't made brownies yet. But a brownie tart? Yes please! I love that there's no cocoa powder in it but chocolate loaded. Adding to my 'to make & bake' list.

I love Ina - you couldn't have picked a better recipe for this week's Sunday Supper (mostly because I couldn't live without chocolate so you're preaching to the choir here). I agree with Alice above - I like Giada but she looks like a bobblehead - way.too.skinny. I watched the last season of The Next Food Network Star and I'd do a double take every time she came on screen. She needs to eat lots of this gorgeous brownie tart!

Totally agree with you on the line-up of chefs who you liked. . and WOW! This brownie tart with the chocolate sauce looks sooooo good! And Giada really doesn't eat that much chocolate. . there's no way. . and she probably has a personal trainer too! :P J/K . . I LOVE Giada. . but she is way too skinny!!

Funny Alice! It would be nice to know a secret to eating a bunch of chocolate and being that skinny.