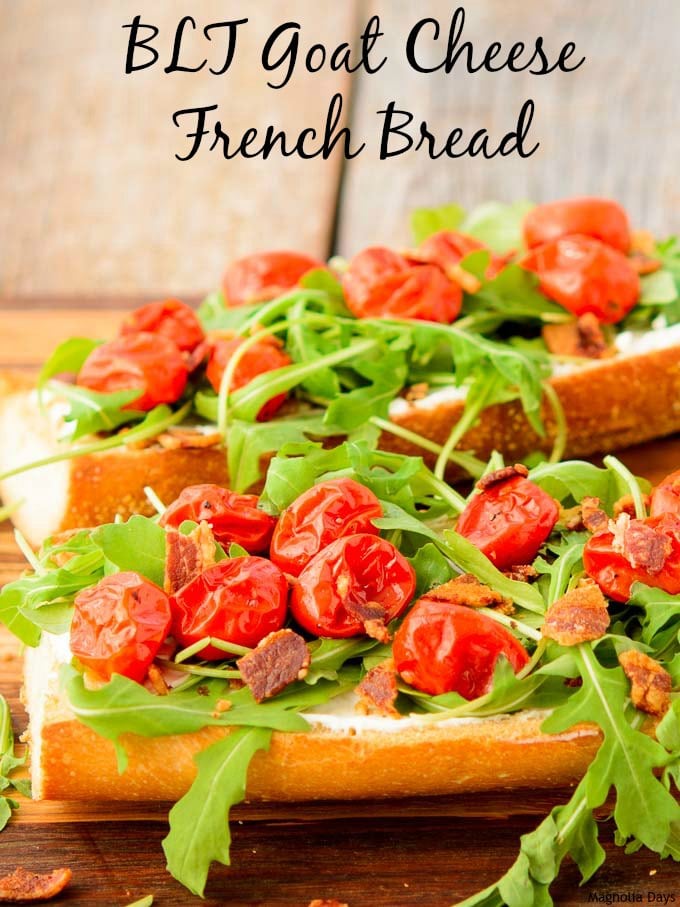 Vine-ripened summer tomatoes are incredible. I’m missing them dearly in the middle of winter. It is not just the tomatoes, it is also the heavenly scent of a tomato plant. Someone should come up with a line of summer tomato air fresheners or fragrances. I certainly enjoy the smell on my hands after pinching off and pruning a plant. However the season is several months away. Until then I was able to capture a little of it with roasting tomatoes and using them on BLT Goat Cheese French Bread.

Roasting tomatoes does wonders for flavor. It brings out a depth and even a slight sweetness to otherwise bland store-bought ones. I especially like roasting grape tomatoes. I could just stand there and pop those tasty bites into my mouth one after the other. In fact, you may enjoy them enough that you will find yourself making extra just so you can have them on hand. Just put the extra roasted ones in a container in the fridge and use them within a few days. 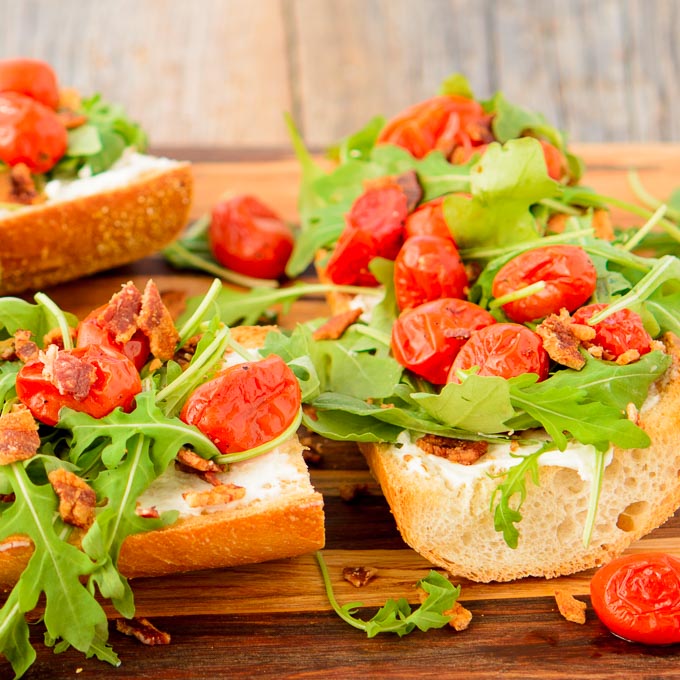 BLT Goat Cheese French Bread is an open-faced sandwich. Another option is to cut the finished slices into smaller pieces and serve as an appetizer. I almost called it pizza but I think it doesn’t really qualify for that classification. Pizza is where crust, sauce, and topping are baked together instead of just toasting bread and putting the toppings on later. 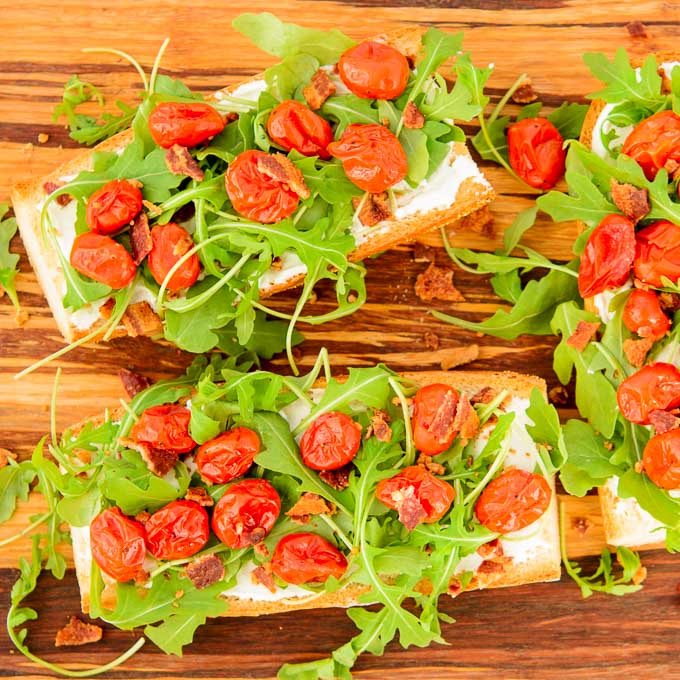 About the goat cheese spread: I recommend using a soft goat cheese sold in the form of a log. Put the cheese into a small bowl, press a garlic clove into it, and stir in half-and-half to make it spreadable. The moment you spread it on the warm toasted bread you will get an incredible aroma of garlic. I could have stopped there and ate it right then. I restrained and waited until the bacon, arugula, and those tasty roasted tomatoes were on top of it. The wait was worth it. If you really like goat cheese and garlic, then make a double batch of it so you can have a thick layer on the bread. 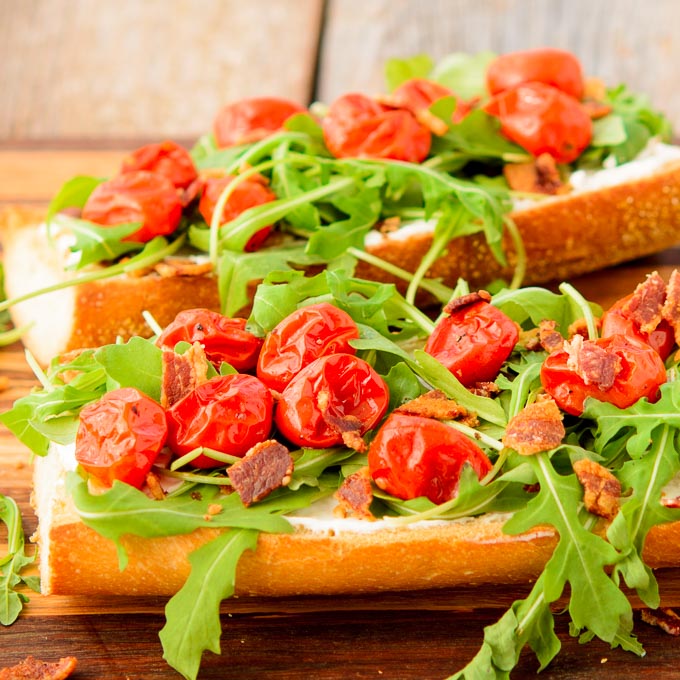 A note about preparation: I used two rimmed baking sheets. One is lined with foil so there is fast cleanup after cooking the bacon. It makes it easy to re-use the sheet right away to toast the bread. The alternative is to either wash the sheet or use a third one for toasting the bread. Roast the tomatoes and cook the bacon at the same time. The good thing is they are both done in about 20 minutes. Keep an eye out and take out the tomatoes when the skins start to pop. Take out the bacon when it is cooked to your preferred doneness. 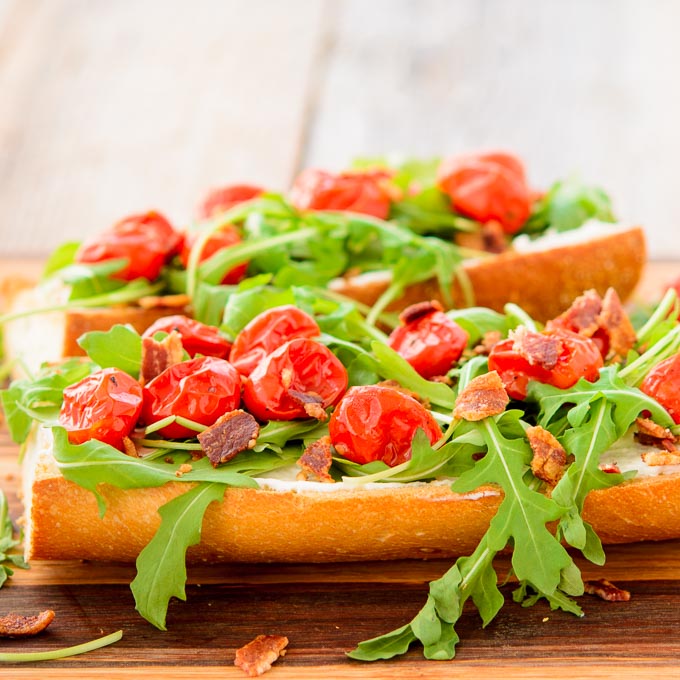 Do you miss summer tomatoes in the winter? Did you can or freeze any from the last season? At least there is the option of roasting them for better flavor in the off-season. I’m thinking of using my extra roasted ones to make a salad dressing similar to the one I used for my BLT Potato Salad Stacks. It’s such fun to get creative in the kitchen. Stay tuned… 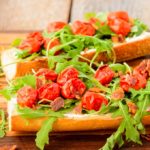 The recommended length of French bread to use is about 14 inches to yield 4 slices about 7 inches long. Increase the amount of bacon, tomatoes, and goat cheese mixture to cover longer loaf slices.

Lucky for me I live in CA so the tomatoes are readily available. And after your description of roasting the red gems, I'm motivated to give it a try! Wish I could package the aroma for you and send them to you =) The goat cheese with garlic looks to be sublime too! I see that lunch at Renee's house is never dull =)

Wow, this is my kind of sandwich, open or otherwise! Goat cheese and arugula are such favorites. I always miss real tomatoes, even in summer sometimes. The city is no place for good vegetables sometimes. How I wish for my own plant Renee!

I agree roasting tomatoes does wonders for store bought. Yes, I miss summer tomatoes. Seemed like so long ago.... wonderful looking dish!

what a great looking taste of summer! Could use that about now...pinned & stumbled!

Aaaaahhhhh there it is!! Oh boy I am still dreaming about this! Now that I know my guy loves goat cheese like I do, I can make this in place of our normal BORING BLTs!!