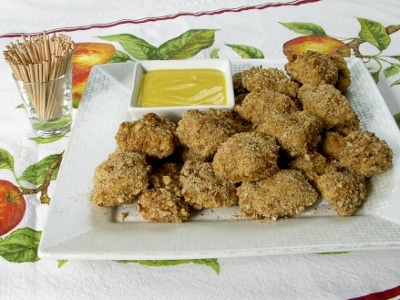 Chicken and pecans go together nicely. It is a combination quite popular here in the South. I have seen variations of pecan chicken dishes on many menus throughout the years. This recipe came about after being inspired by a salad at a restaurant. I wanted to re-create the salad at home since my husband enjoys it and orders it often. When he said he would rather have one of my other salads, I decided to go with the nuggets sans salad.

I have made pecan chicken breasts before. The recipe is one I came up with as an adaption to the way I prepare turkey cutlets. It consists of a simple dipping of the meat into flour, egg, and breadcrumbs. The only difference is the addition of chopped pecans to the breadcrumbs. One other change is baking instead of frying. I wanted the nuggets to have the flavor of roasted pecans.

The next step was finding the right honey mustard sauce recipe. I searched the internet and came across several of them. I narrowed them down by ingredients (I wanted yellow mustard and not dijon). Some were as simple as mustard and honey mixed together and others included mayonnaise plus various spices and vinegars. What I wound up doing is going into the kitchen and winging it. I started with some mayo and added mustard and honey until it I thought it had the right balance. I added cider vinegar for a little tang. The result was exactly what I wanted.

Do you find yourself making things up as you cook? It is fun to put your own spin on a recipe or recipe concept. Having the ingredients and the end result in mind makes for creative cooking. It is an on-going journey and I cannot wait to see what I will explore next in the kitchen. 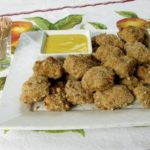 For the Pecan Chicken Nuggets:

For the Honey Mustard Dipping Sauce

For the Chicken Nuggets:

For the Honey Mustard Dipping Sauce:

A recipe for easy homemade baked chicken nuggets with a pecan crust and a honey mustard dipping sauce.

I love to put my own spin on recipes. You did a great job with this one :-)

Wow ! love this ! Soo healthy too. Will try it for when my kids want nuggets next. Must get some pecans though and yr mustard recipe is simple too !

Thanks! The nuggets would be great for kids and much better (healthier) than the deep fried ones.

these sound awesome! i'll definitely have to try these for a weeknight dinner or group get-together one day soon. they sound wonderful!

Thanks Amy! They are a great appetizer - so many people like chicken nuggets.

These look SO good, Renee. I refuse to buy those prepackaged things! And why would I when I can make these?

Thanks Jen! Yes, they are much better than the store-bought prepackaged ones.