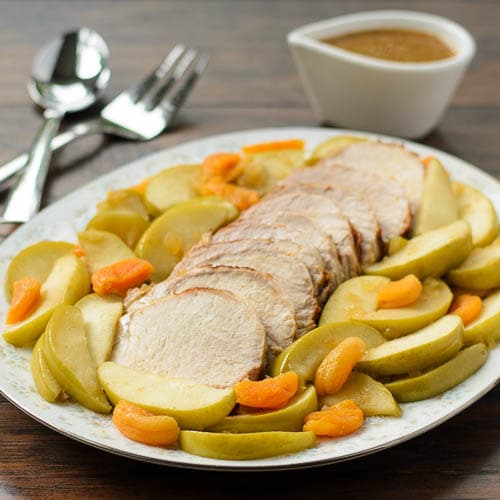 A crumpled paper towel is on the counter. It is left out to dry and be re-used later. An old percolator coffee pot used to strain and store bacon grease is in the cabinet below. Beside the pot are grocery bags to be used as garbage bags. Various containers are in the refrigerator filled with leftovers. This was the kitchen in my parent’s house when I was a kid. My parents were frugal and thrifty. Food and so much more was never wasted. We had what was left of big meals throughout the following week and beyond. I may not re-use paper towels however I do my best to utilize leftovers. An Apple Cider Braised Pork Roast can be re-invented in lots of ways and frozen to be enjoyed months later.

The pork roast simmers for hours in a dutch oven. Apple cider and onions flavor the roast and give it a subtle sweetness. After the roast has cooked, fresh tart apples, apricots, cardamom, and cinnamon go in the pot. The apples and apricots soften as they cook and become side dish to compliment the pork. Reducing the cooking liquids makes a sweet/savory and lightly spiced sauce to tie all the flavors together. 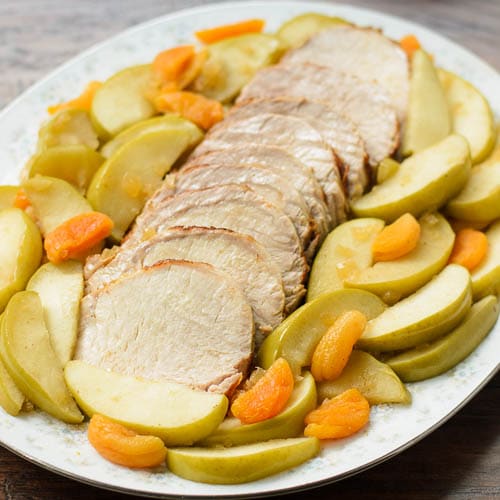 The leftover pork slices can be used in many ways. You can use them in a sandwich, cut them into pieces and add to pasta or a salad. I can see warming them in a pan with barbecue sauce and serving on a bun or Texas Toast. The fruit can be a snack or re-heated and topped with vanilla ice cream for a dessert. Note that there will be a slight savory element with the fruit because of being cooked in sauce. A tip about re-inventing leftovers: Think about complimentary flavors to the ingredients of the original dish. Make a homemade dressing using apple cider vinegar for a salad with this pork. The elements of the salad would be things that go with pork and apples. It’s easy to do! Be creative and have fun.

Today’s Sunday Supper is about big meals and re-inventing leftovers. American Family Insurance understands the value of families spending time together cooking and enjoying a meal together. AmFam has launched a Back To The Family Dinner Table campaign and has partnered with Sunday Supper for our event.

There’s exciting news too: American Family Insurance is having a “Share Your Recipe” sweepstakes with a weekly prize of a $100 Williams-Sonoma gift card plus a grand prize of a $500 Williams-Sonoma gift card. Share your family favorite recipe and you could also be included in their e-cookbook. Go here for the details -> AmFam Back to the Family Dinner Table Sweepstakes.

Do you re-invent leftovers?  It’s fun to transform them into a whole new dish. Plus it gives a variety of meals for your family. Be sure to scroll down to the recipes by Sunday Supper bloggers. Visit each one for tips, ideas, and inspiration on what to do with leftovers. 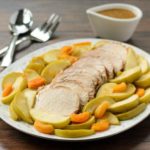 A recipe for apple cider braised pork roast. A boneless pork roast is slow-simmered in apple cider with onions then finished with tart apples and apricots.

Recipe adapted from one in a Publix Grape Magazine.

Recipes for big meals and ideas for re-inventing leftovers by Sunday Supper bloggers:

Disclosure: This post is sponsored by American Family Insurance. All opinions are my own.

Can't wait to try this - have some apple cider in the frig I need to use up. I try to be saving, but my mother was ridiculous. She saved plastic bread bags among other things!

Love this apple touch on regular pork roast, would be a hit in our house!

Thanks Pamela and we were stuffed after this meal. Both of us kept going back to the platter for another slice and some apples and apricots.

You are so very creative!

Thank you Jamie for such a nice compliment.

Pork roast is a favorite in our house! Yours looks amazing, Renee. I love the colors with the apricots and apples.

Mmmmm...pork and apples are perfect for fall. Anytime my husband makes pork chops I break out the applesauce. BTW...I am constantly putting my paper towels on the counter and I reuse them. My husband thinks I should just use less paper towels. hahaha!

My parents always served apple sauce with pork chops too. And good to see another paper towel re-user.